Written by David and Photography by Charla in Wine & Dine

Making responsible choices is difficult when one is hungry. Charla and I were starved one evening and facing a kid-free date night without thought of where to go other than our favorite standbys.

As so often happens in this neighborhood, two of Charla’s friends rode by on their bikes and recommended Ají Peruvian on Long Beach’s Fourth Street, and then rode off again. I am not making this up. This kind of casual connection with people has not been a part of my experience since college, only now it is about food and playdates rather than kegger parties and study breaks. 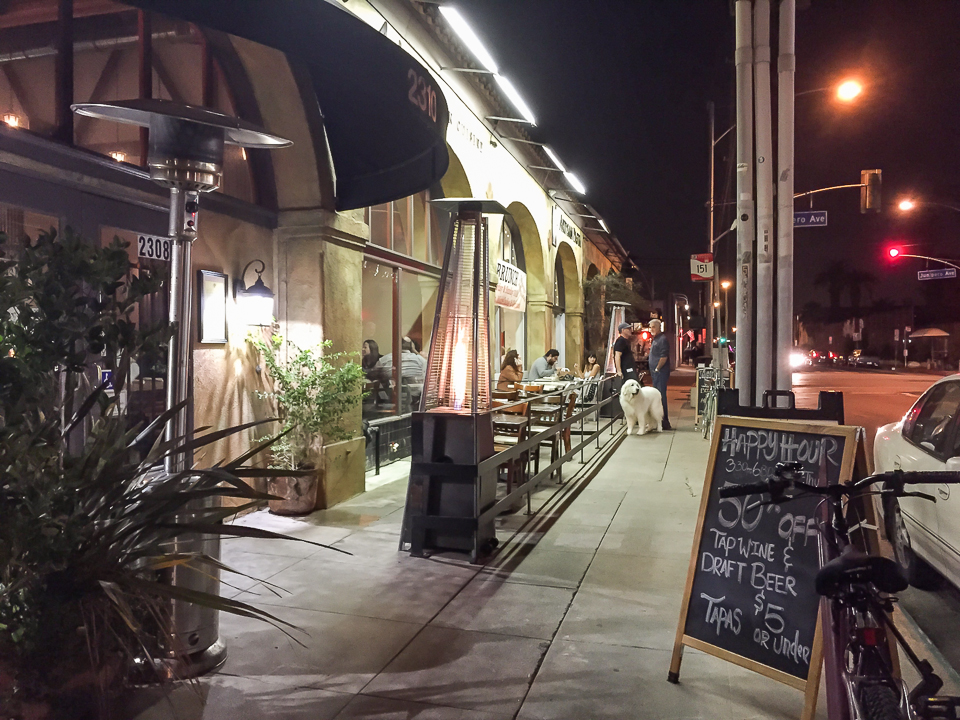 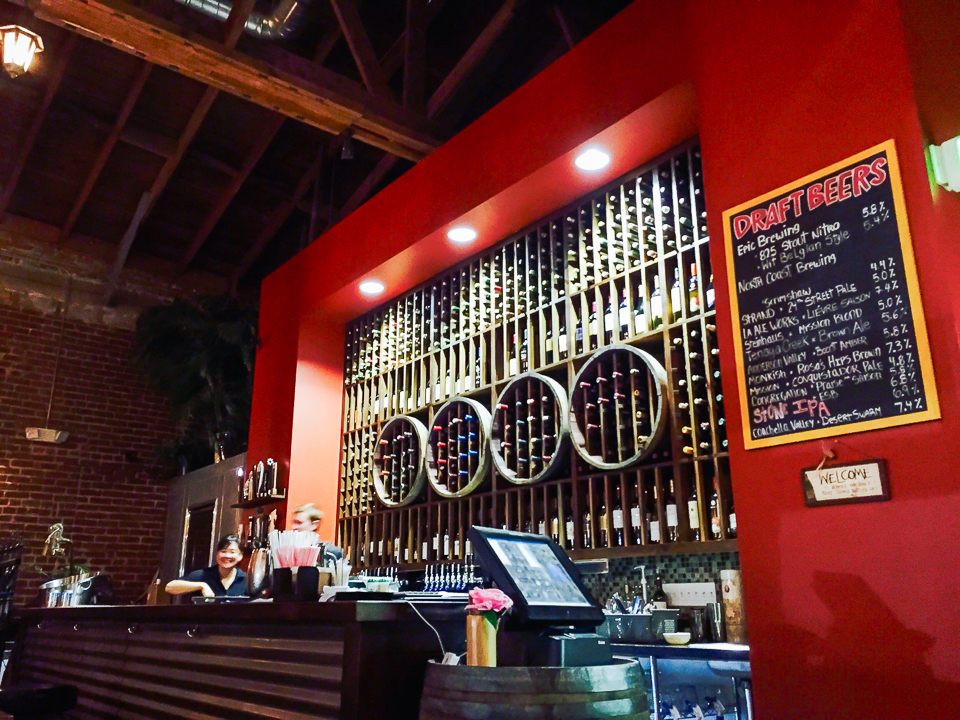 At Ají Peruvian, we dove into the appetizers and small plates menu and started with a causa. What is that? A causa may look like some kind of sushi, especially in the way that Ají prepares it. But there the comparison ends. The base of the causa is mashed potato that is flavored with ají amarillo, then shaped into a squat, sushi-like cylinder and topped with shrimp, ceviche, avocado, sliced onions, or pretty much whatever can be made to fit on that space.

Ají amarillo is a kind of hot pepper that is widely used in Peruvian food. I didn’t have to go far in looking up this kind of pepper before I ran across some strong opinions on its role in food. “Ají” is a name widely used in South America for peppers where “chiles” is more commonly used in the U.S. and Mexico. This linguistic difference appears in odd ways, such as the hilarious and scandalous name of a very spicy ají pepper in Argentina. 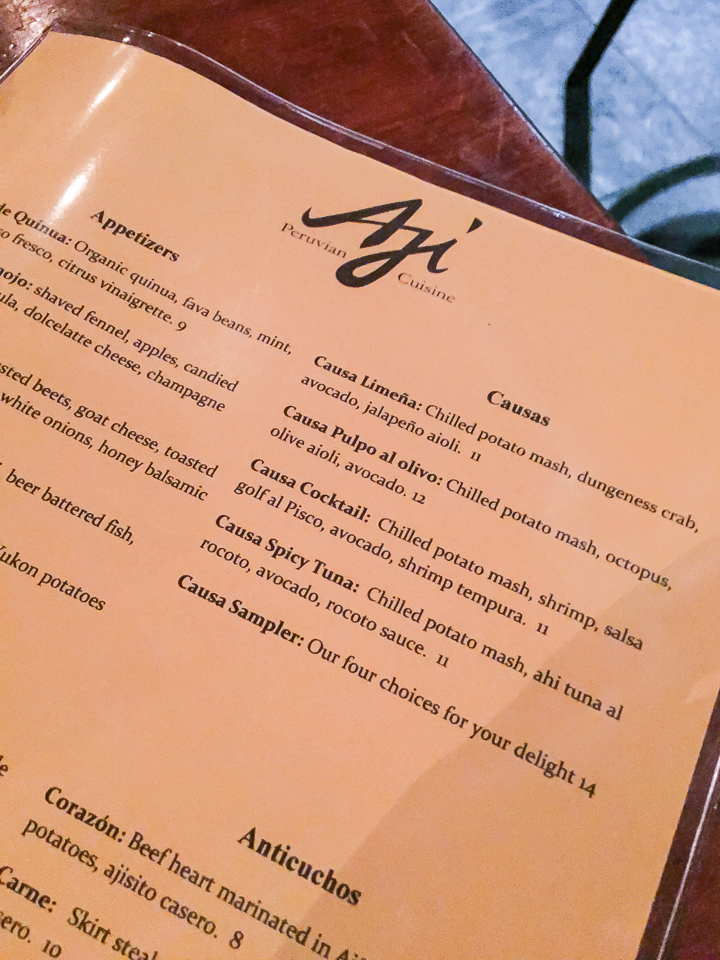 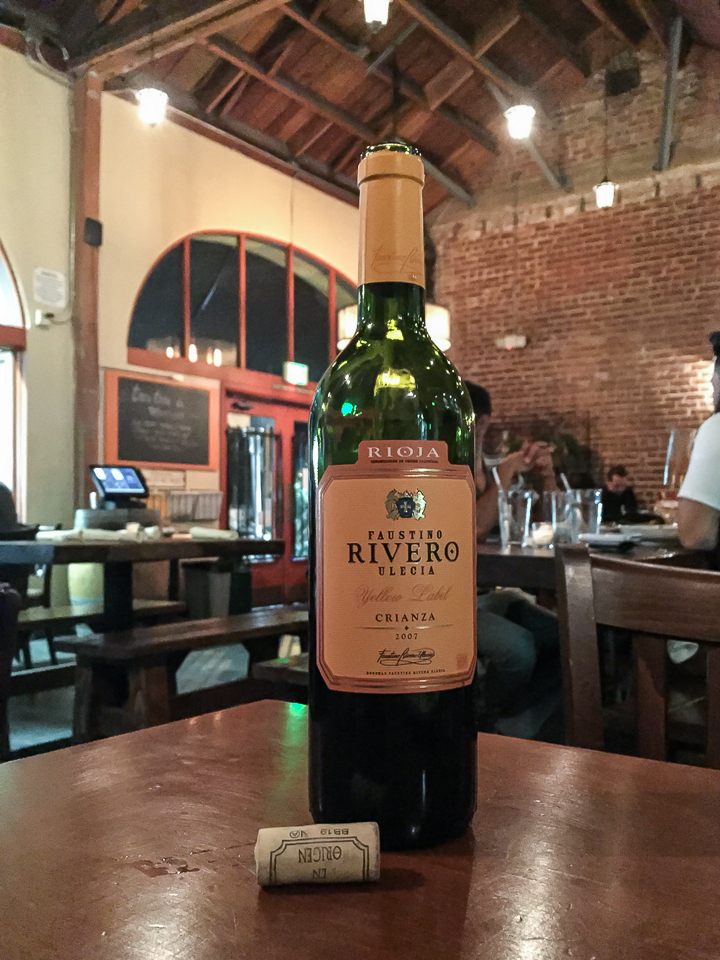 Back in land of Peruvian cuisine, the aji amarillo appears to belong to one of the “ignored and disenfranchised” families of peppers, which nonetheless is more fruity and less spicy than its brethren from Mexico. Ají amarillo can be found dried, fresh (if you’re lucky), or bottled as a paste. Some causa recipes call for mixing ají amarillo paste into mashed potatoes and then you can serve it or shape it into whatever is called for.

At Ají Peruvian in Long Beach, after you have ordered something to drink start with the refreshing Causa Limeña (with dungeness crab, jalapeño aioli. and avocado), the sushi-like Causa Spicy Tuna (Ahi tuna al rocoto, avocado, and crema de rocoto) or the Causa Pulpo al Olivo (with octopus, olive aioli, and avocado). 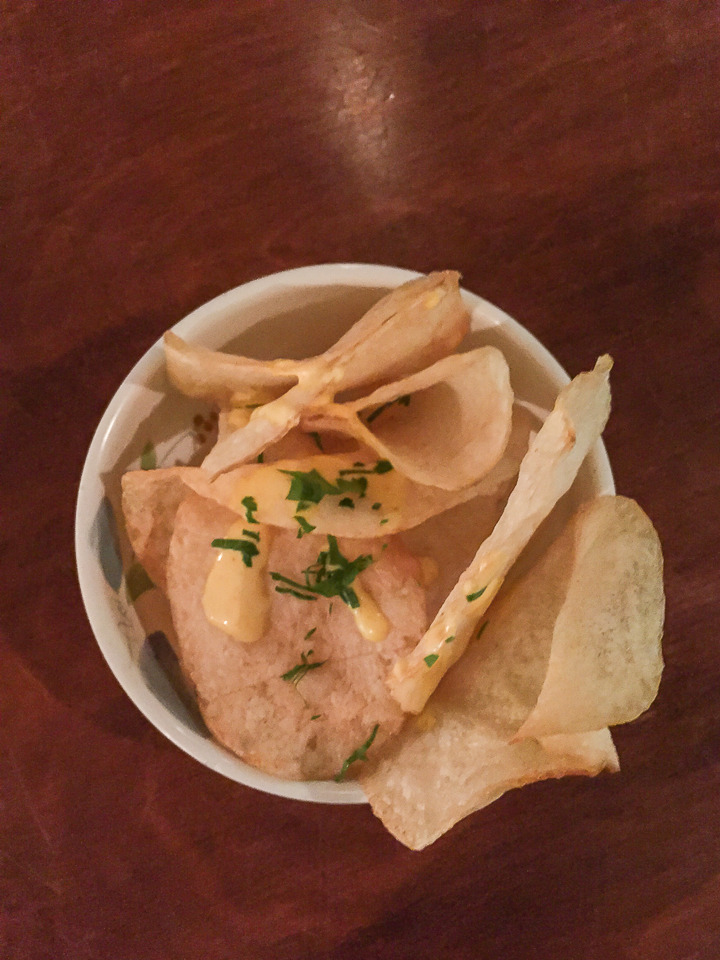 A perfect companion to the causas at Ají Peruvian is the more familiar ceviches. A ceviche is some kind of fish or shellfish that is marinated in lemon or lime juice, and accompanied by anything like tomatoes, chopped peppers, onions, garlic, avocado, or chopped herbs. Ceviches also appear in Mexican food, once you get away from college-town party food and hangover food such as quesadillas and burritos. If you are unlucky, some restaurant or bar might serve you a few pieces of fish smothered in a pile of chopped tomatoes and onions, which all go with your overpriced and underpoured margarita.

If you are lucky, however, then you will be chowing through Ají Peruvian’s Ceviche Mercado, a masterful gathering of sea bass, octopus, shrimp, fried calamari, and sliced onions, all artfully piled into a pyramid stacked above the plate. If you still have room, and you will, then follow that up with the Ceviche Moderno, with sea bass, onions, cilantro, leche de tigre, ají Amarillo sauce. 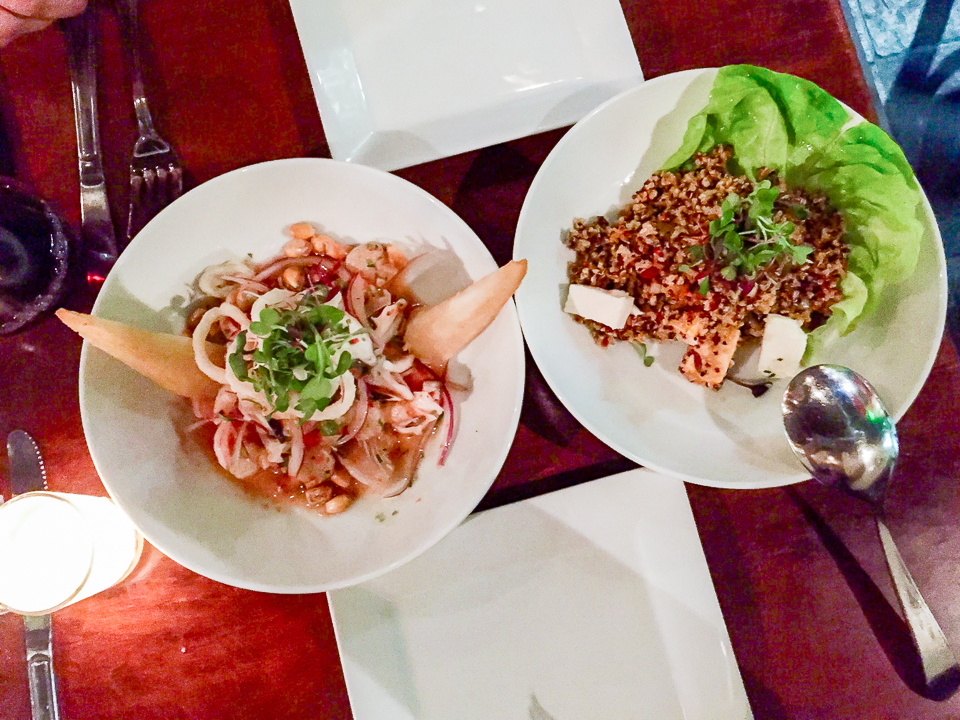 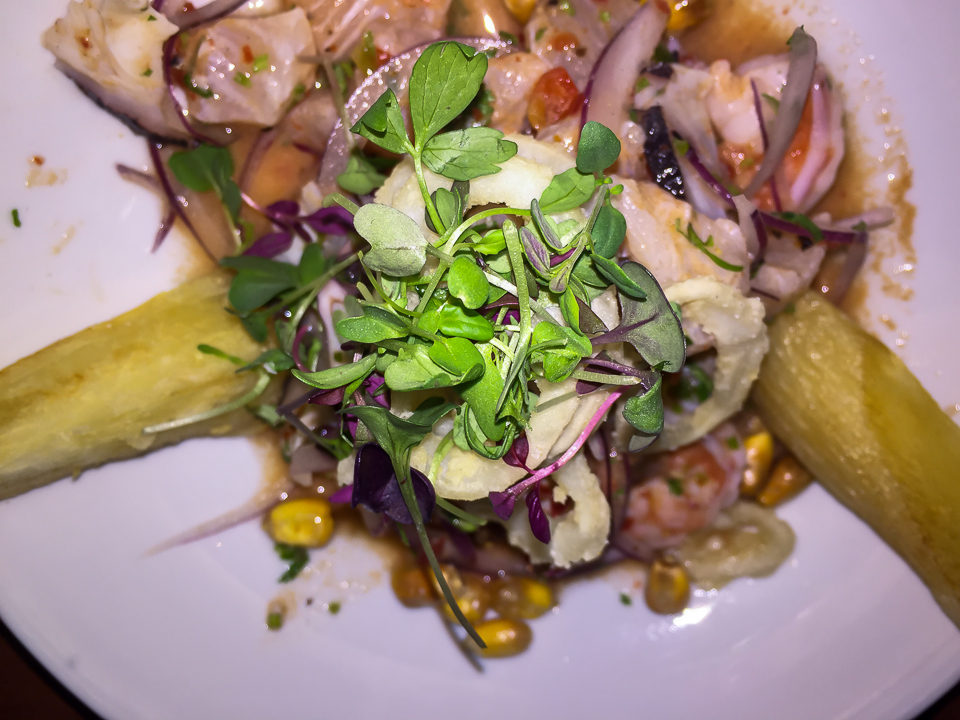 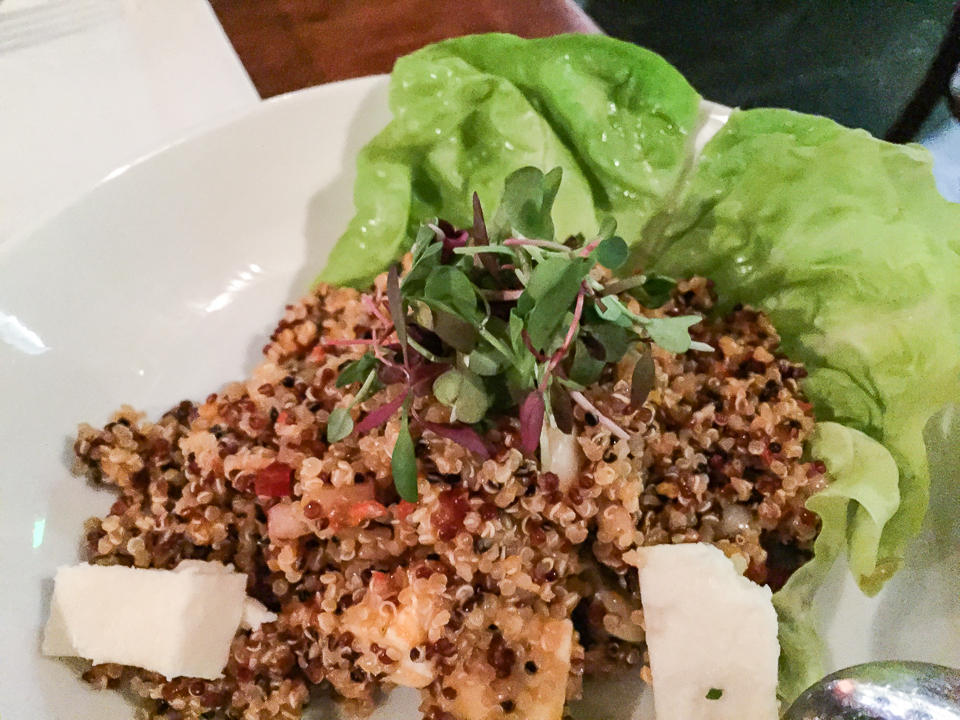 For parties into family-style sharing, like us, or if you are starving and just want a whole plate to yourself, then work through the many entrees on Ají Peruvian’s dinner menu. We are not fans of big dishes with big food and it is rare that we make it past the appetizer section and into more than one entree dish.

We are not really dessert people either. By “we”, I mean mostly Charla, because I can easily fall for a rich, dense, chocolate-y dessert goodness and call it a night. I could have also gone for what was recommended to us, Pisco Ice Cream, made from Pisco, a kind of brandy made from Muscat grapes, which was invented in Peru is made better there than anywhere else. Unfortunately, we were told, the chef didn’t make it that night so I was out of luck. Next time, for sure. 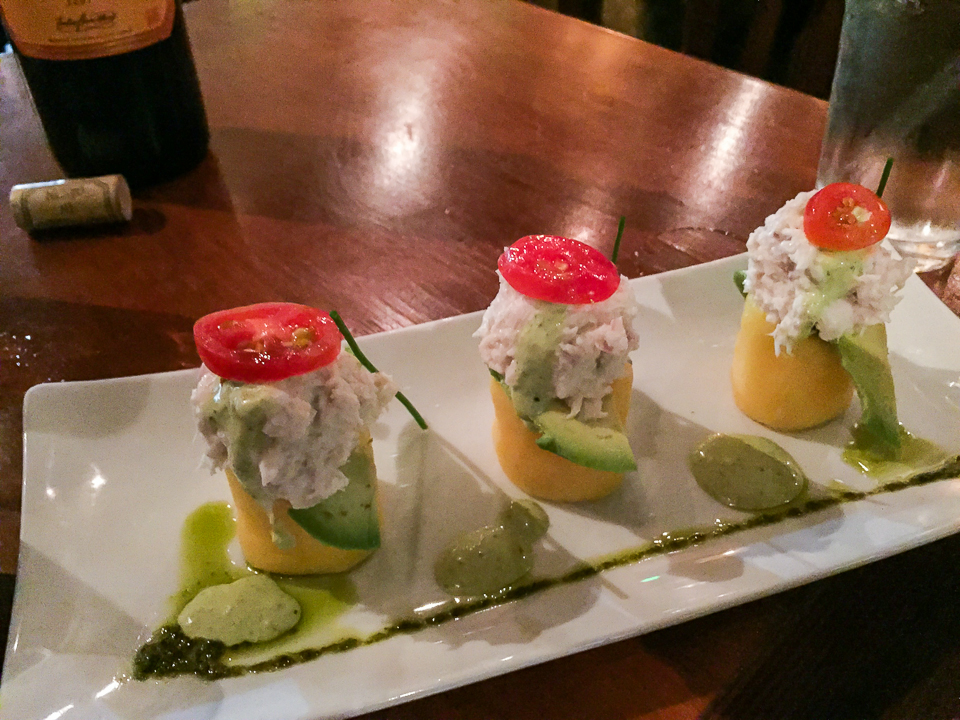 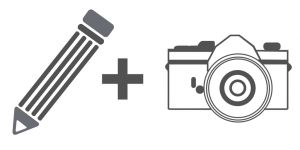