There are few things quite as happy as sitting to lunch with an empty stomach, a group of friends, a possible glass of red wine, and being presented one local Italian dish after another: Caprese salad with mozarella cheese so creamy and fluffy that I almost fell asleep on it. Sharp marinaded olives on a bed of lettuce and tomatoes sprinkled with oregano and olive oil. Then pasta served with fresh-caught shrimp, clams and mussels in a tomato sauce with basil and more olive oil. How fresh was the tomato sauce? When we left Ristorante Belforte in Vernazza, Italy, I saw boxes of fresh, fire-engine red tomatoes sitting outside the kitchen door waiting for the next wave of diners. 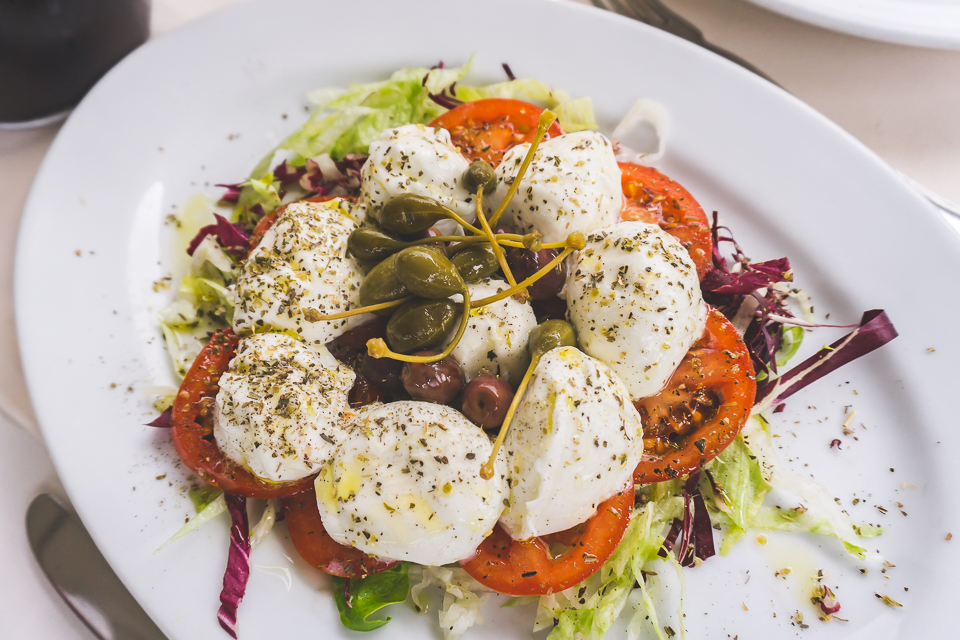 Back at lunch, someone ordered a dish of assorted fried fish with a squeeze of lemon, and someone else had squid ink pasta, where the pasta turns black after blending with the squid ink and imparts a rich, ocean-y flavor to go with the shellfish accompanying it. The dining terrace at Belforte was atop a turret several hundred feet above the choppy Mediterranean Sea. After a rainy morning, a cold wind cut through the terrace but we didn’t mind and neither did the shore birds hovering nearby, waiting for a handout.

It is always dangerous to write a blog post about food when hungry – starving – for the same reason it is dangerous to shop for food while hungry. I am doing both today. Still, the lunch at Ristorante Belforte in Vernazza was the high point in a series of high points throughout Cinque Terre.

The aftermath of “Spaghetti Bruno” with fresh mussels, clams and shrimp

See that restaurant? Find it and eat there! Ristorante Belforte

Friends at lunch at Belforte in Vernazza

The name Cinque Terre means “five lands” and refers to five picture-postcard towns that are clinging to the side of steep mountains that plunge into the sea. These towns are UNESCO World Heritage Sites, however many more coastal communities along Italy’s northwestern coastline could stand in as well.

Even the dead enjoy stunning views in Manarola’s cemetery

Centuries ago when this region was first populated, fishing villages turned their backs on the barriers of tall mountains and long overland journeys inland. Instead they focused on the sea, developed their own dialects and customs, and engaged with trading partners from all over the Mediterranean.

Monterosso is all about the beach

This link to the sea is strong today. The only way to access the Cinque Terre towns by car is along a narrow winding road. But why bother? Cars are banned inside the towns so you have to park outside and hike in. For visitors, a better idea is to take the train from La Spezia, the large port town 20 minutes away that has better connections with the rest of Italy.

The train from La Spezia to each of the five towns is largely through tunnels dug into those mountains because there just is not a lot of flat space to lay out tracks. Your train will suddenly emerge from the tunnel into the blinding flash of the Mediterranean coast, some fishing boats and ferries, and houses dangling from cliffs high above.

Train stop at Manarola, first of the five towns in Cinque Terre from La Spezia

There are few things more romantic than a good train station at the center of town.

Each of the five towns has a character all its own. You can walk on cliffside footpaths between them or catch another train for a three-minute ride to the next one. Monterosso, the furthest north of the five towns, featured a long beachfront where afternoon visitors took in the first rays of early spring sun after a cold, cloudy and rainy morning. The town is packed and there are as many day-tripping Italian visitors as there are tourists from elsewhere.

I regretted not getting a paper cone filled to the top with fried calamari and fried potatoes accompanied by a garlicky aioli sauce. You see, I was full of food then, unlike now at the time of this writing. I will definitely go back to Cinque Terre, not only for a bite but also to take more time and enjoy more slowly the pace of life in this whole region.

Rush hour on Via Antonio Discovolo in Manarola, the town’s main street

Lucky neighbors living next to Da Aristide Restaurant in Manarola