This is the second of a three part series, “To Madrid: A love letter”. The first post is here. In this second post, Madrid eating should be an entire blog by itself so we will just touch on it here.

We staggered with full stomachs out of a paella restaurant and wandered into Plaza Mayor. It was colder now than it was before lunch. The rain didn’t dampen the spirits of the Madrileños and tourists walking on the cobblestones containing centuries of history. Charla shivered and pulled her knit cap lower over her head.

Brick-red walls supported by stone columns and a covered colonnade walkway ringed the plaza. A statue of King Philip III on horseback sits proudly in the center, hinting at centuries of spectacle, romance, drama, and violence, while conveniently sitting on top of an underground garage where you can park your car for just 1.23 euros or $1.30 per hour.

I couldn’t leave Madrid without proper tapas. Charla didn’t know whether to laugh or be alarmed at my insistence on more food after a heavy lunch. She followed me out of the Plaza and down a flight of stairs onto Calle Cava de San Miguel, a popular tiny street clustered with restaurants and tapas bars.

I dragged her into the Mesón del Champiñón, literally the “mushroom bar”. This street has a string of traditional bars called mesones. As a student I stood mesmerized inside the Mesón de la Guitarra a few doors down, where flamenco guitar players laid down the tight and aggressive rhythms that would haunt me for years. My college friends dragged me out of that place because they wanted to go to the nearby Mesón de la Tortilla and eat more typical Spanish dishes.

“Seriously. I can’t eat another thing,” Charla said with a grimace as we left the Mesón del Champiñón. We had just downed grilled mushrooms stuffed with a mix of garlic, parsley and jamón serrano (similar to prosciutto) and washed it down with a glass of red Rioja wine.

We wandered back into Plaza Mayor where Charla bought a black wool poncho to keep warm. We continued on another side street. It got colder still.

I looked longingly into Bar Postas, a spare bar with parquet floors, garish fluorescent lights, and loud men working behind the counter. It was empty of patrons but the displays were full: thick fried calamari rings with wedges of lemon, roasted peppers, shrimp sautéed in garlic and wine, fresh sardines with olive oil and lemon, sandwiches of cheese and chorizo, Spanish omelets, garbanzo salads, croquettes, every kind of seafood, jamón serrano, all in a dizzying array that stopped me in my tracks.

It was true. We were so full that we could barely walk.

Three minutes later, Charla stood next to me as I tucked into a tiny plate of fried calamares inside Bar Postas. I just couldn’t stop. Several groups of well-dressed Spanish men and women walked in. They ordered olives, chips, diet cokes, a few beers. Then they left. Charla took a bite of my calamares. She agreed they were delicious but just couldn’t eat another.

Skip to read more below… 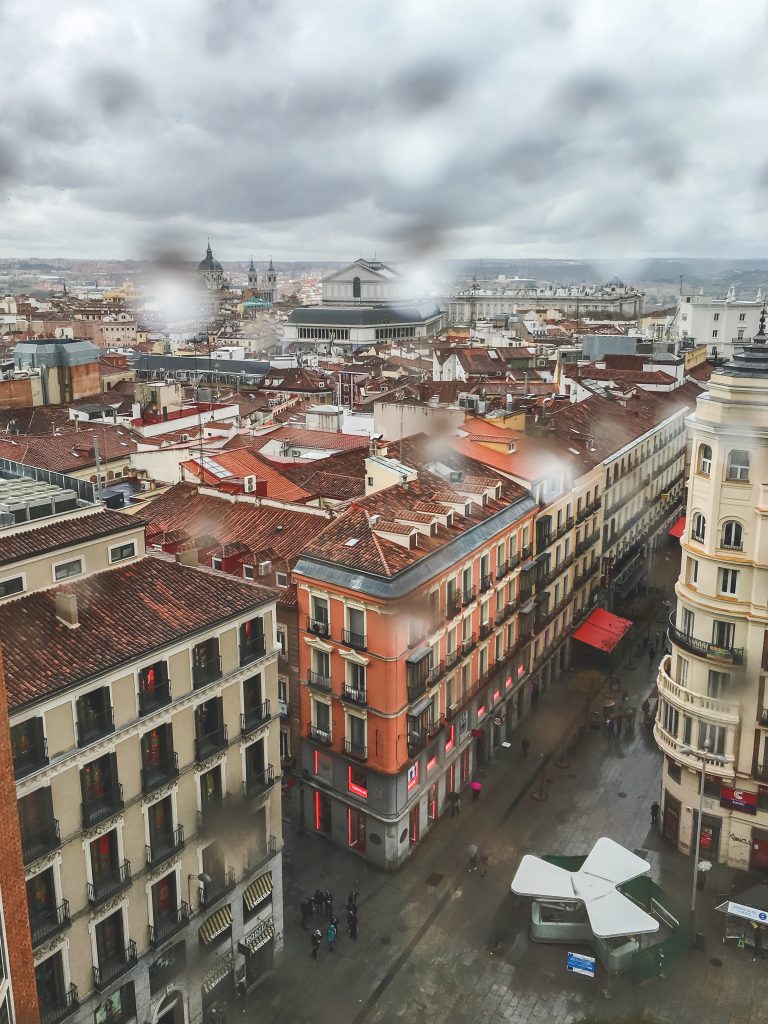 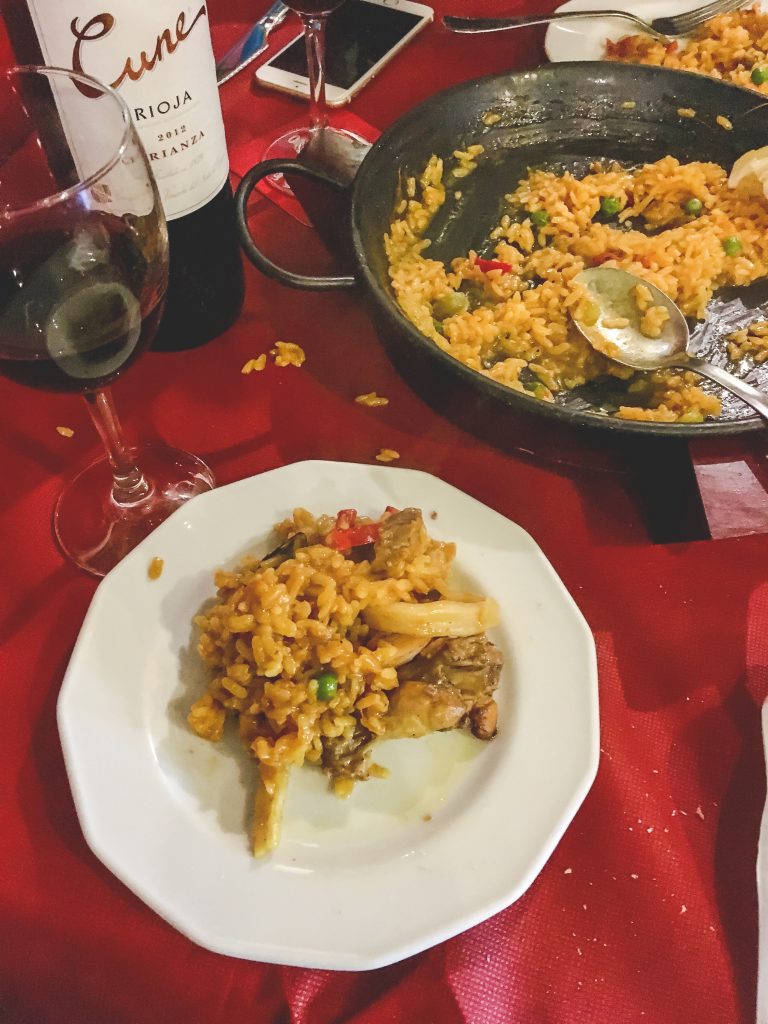 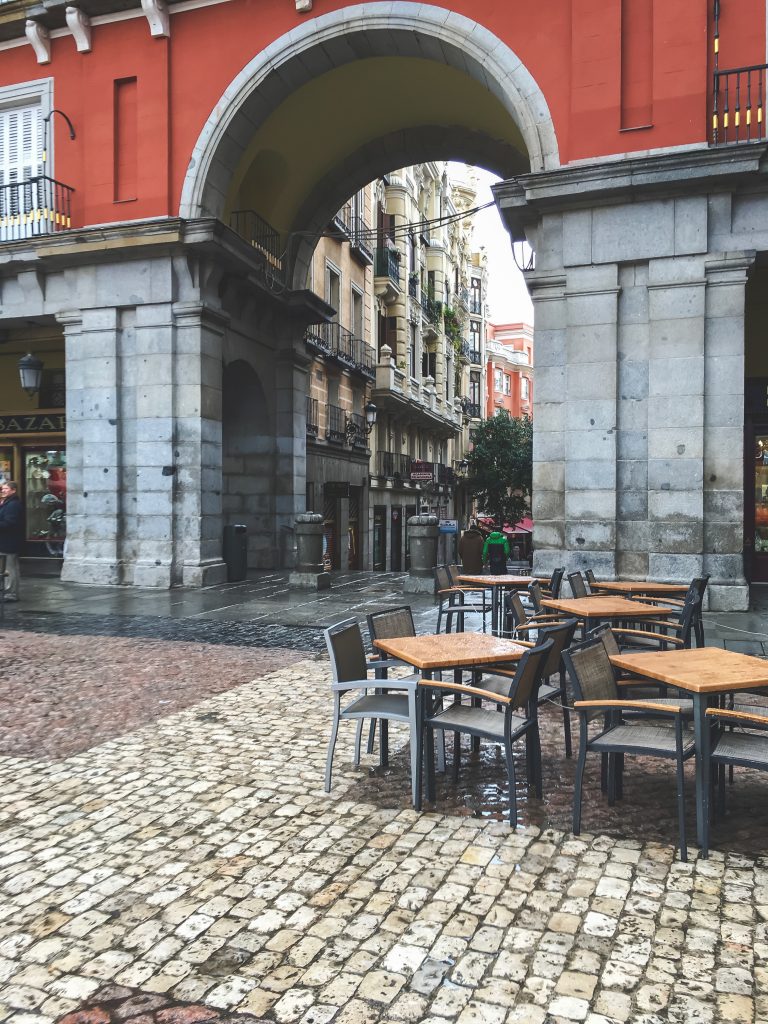 Detail of Plaza Mayor on a rainy winter day 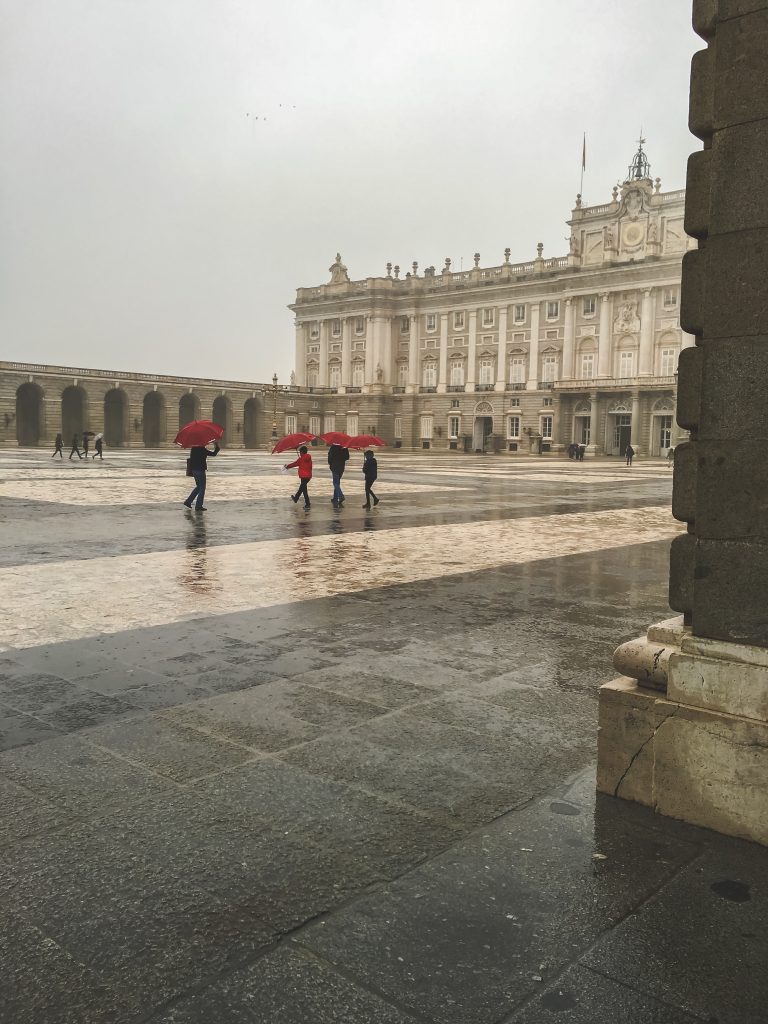 Rainy morning at the Royal Palace, the Palacio Real in Madrid 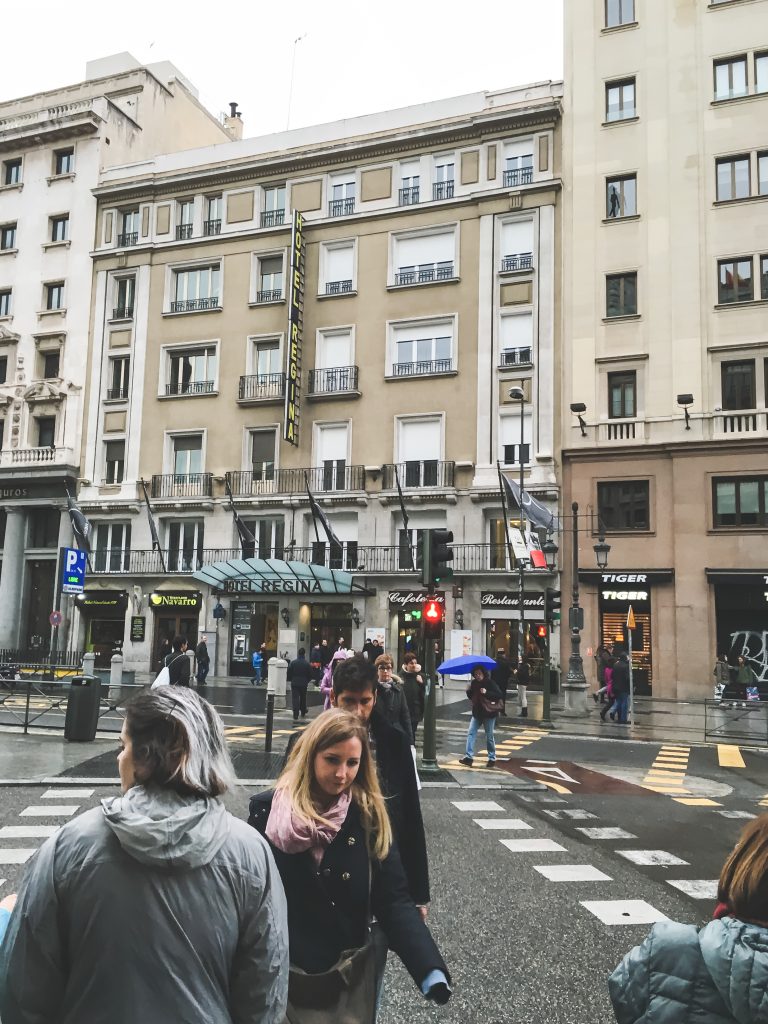 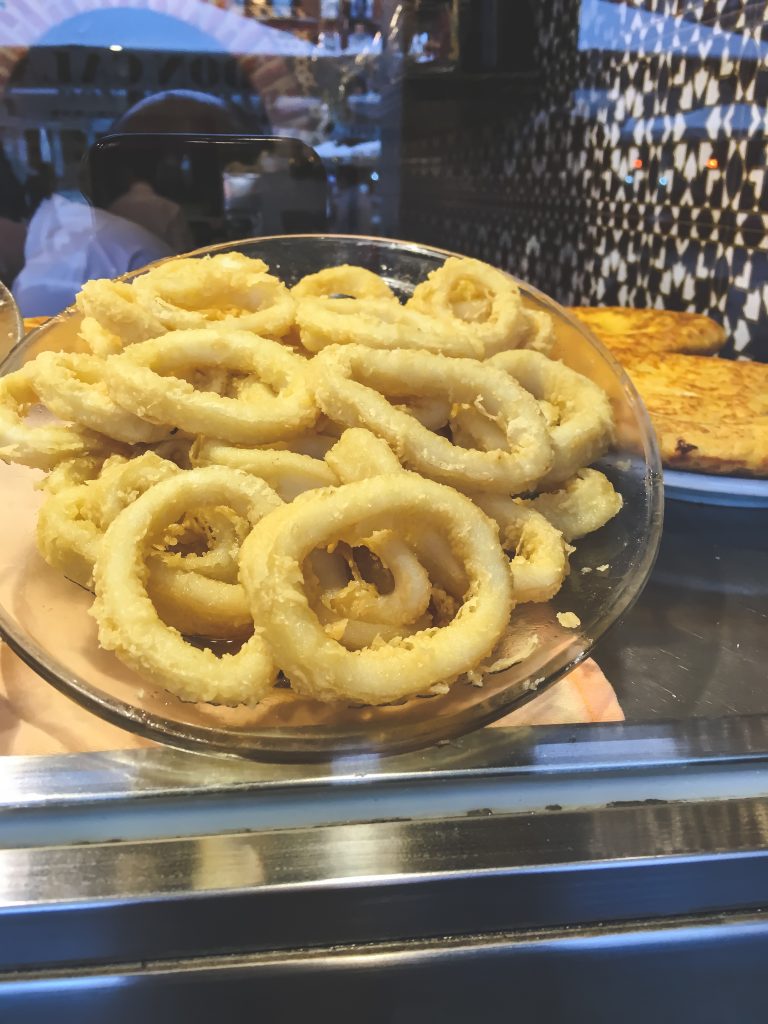 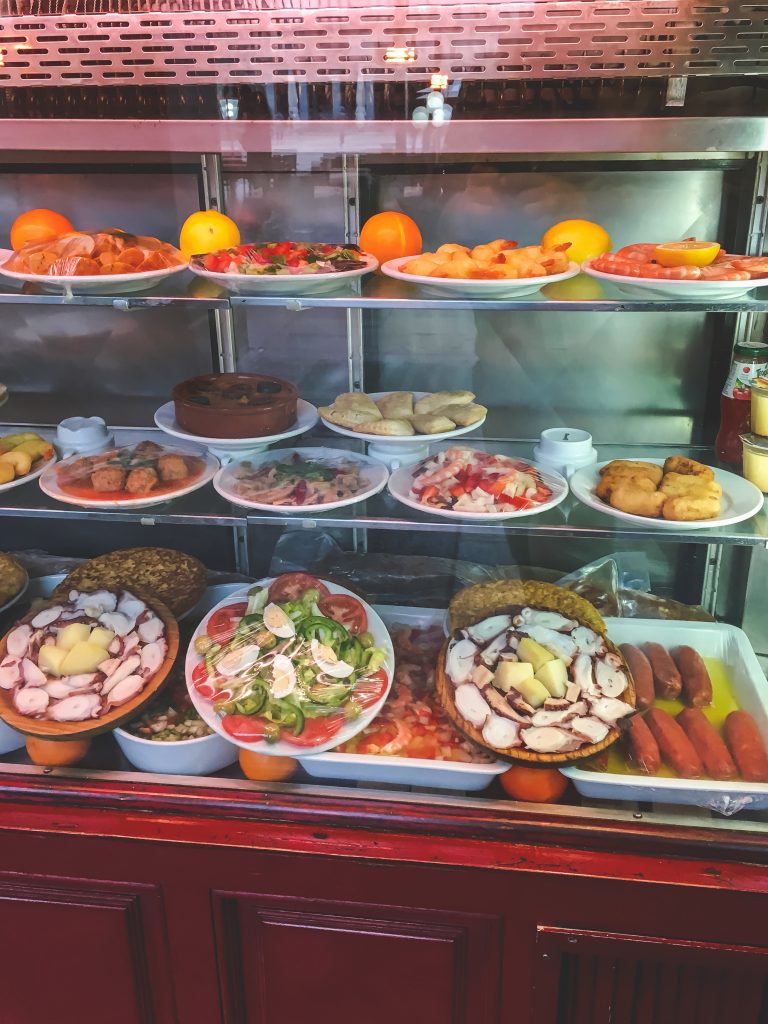 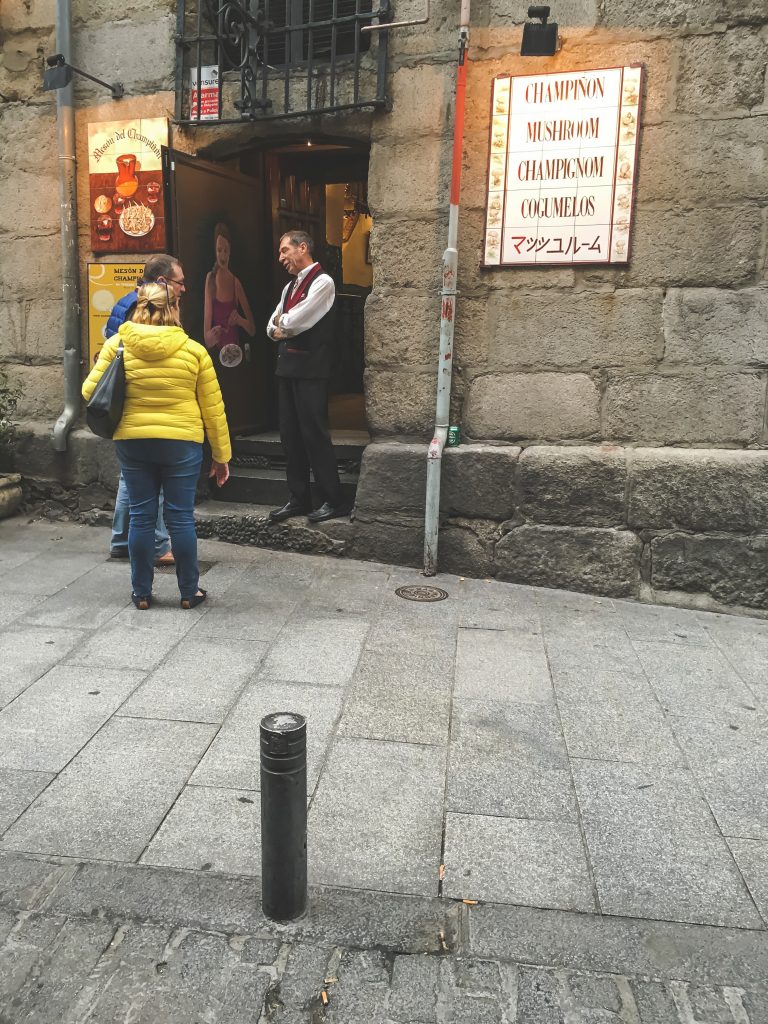 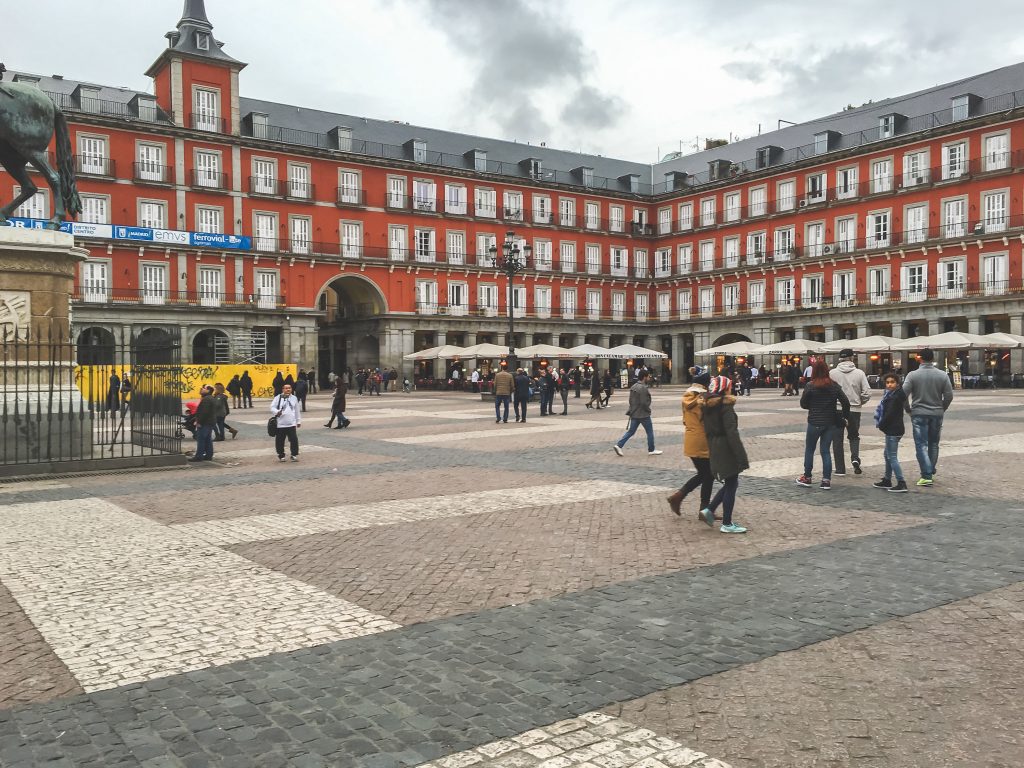 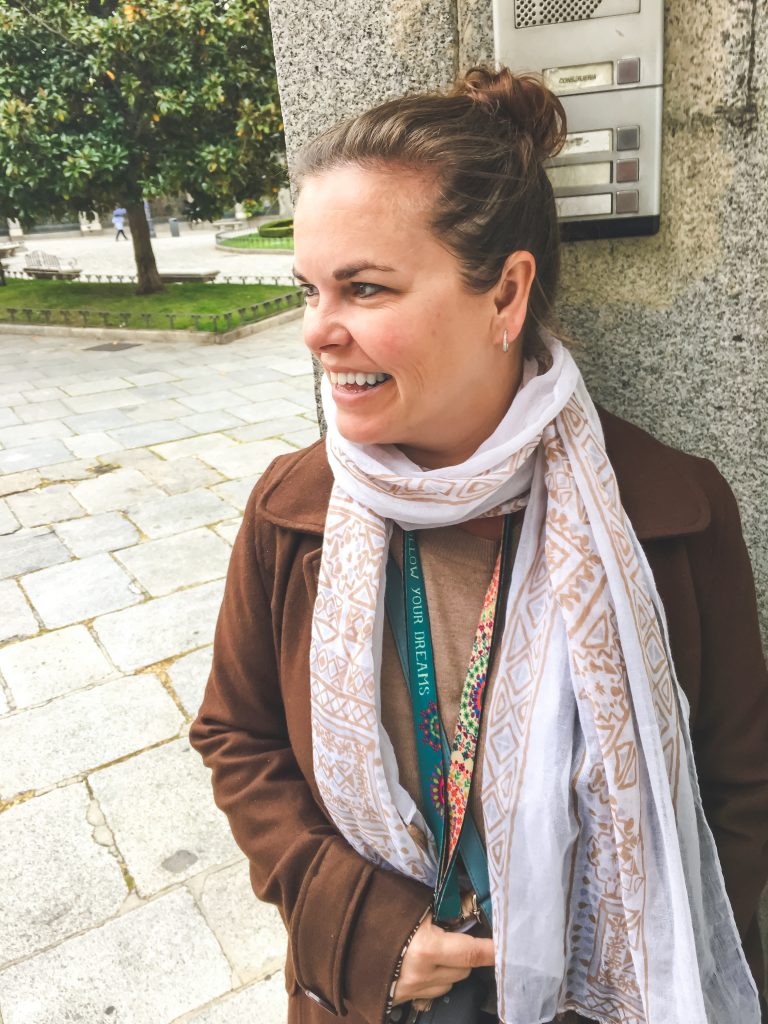 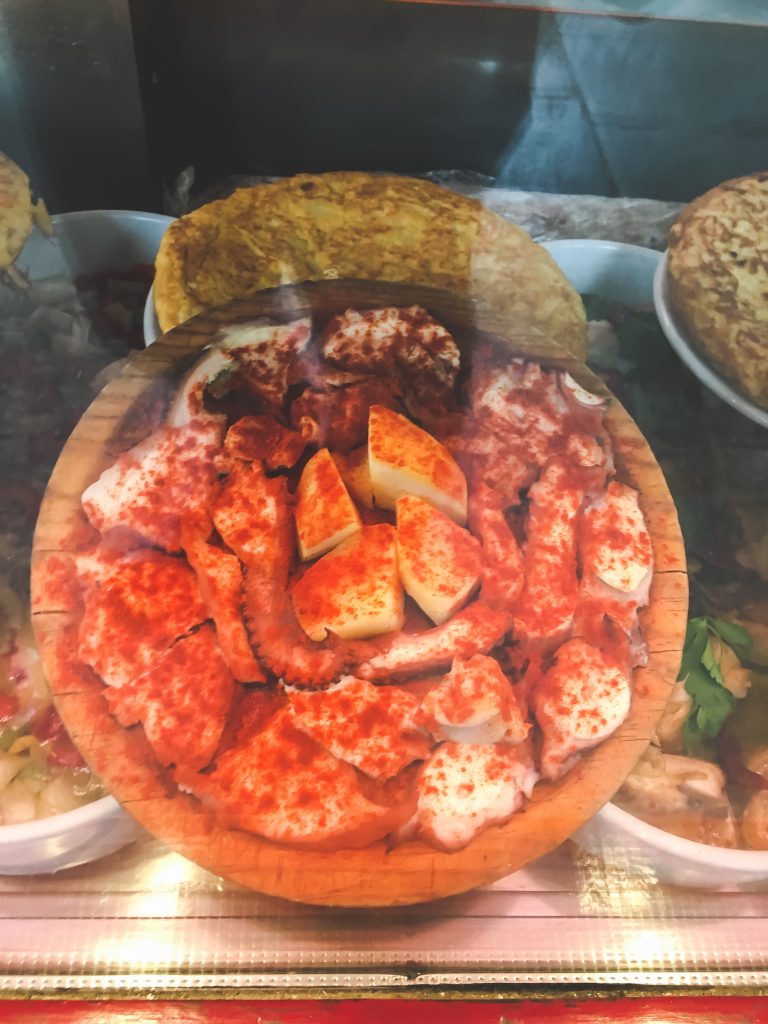 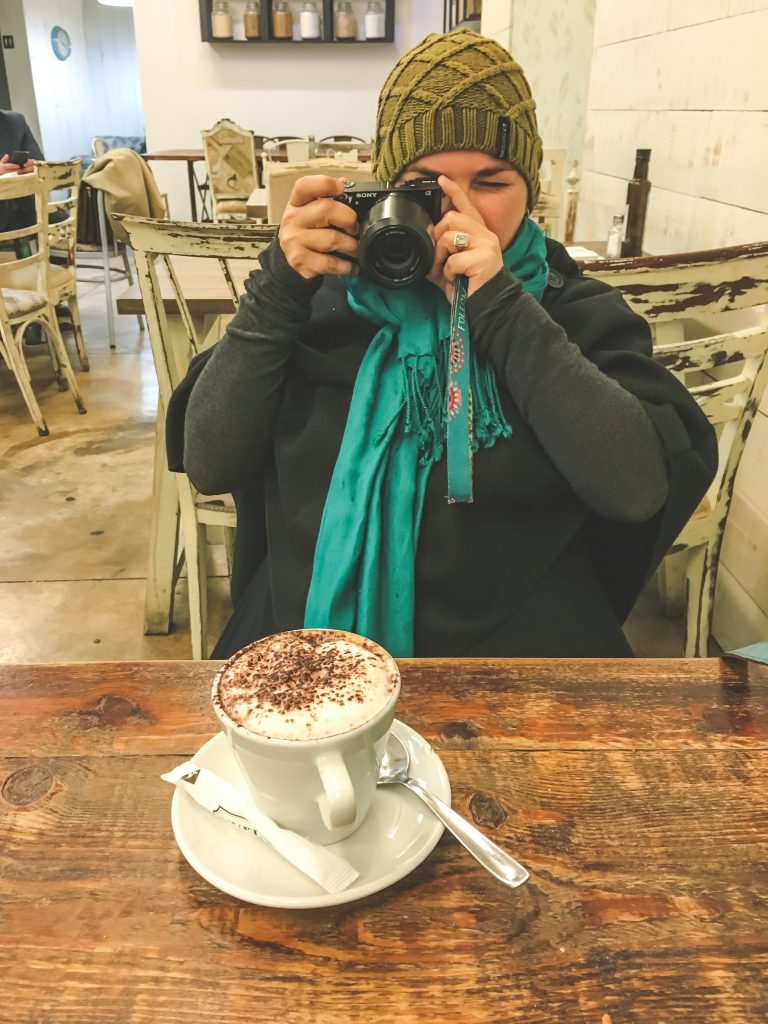 Afternoon coffee in a Madrid café on a cold rainy day 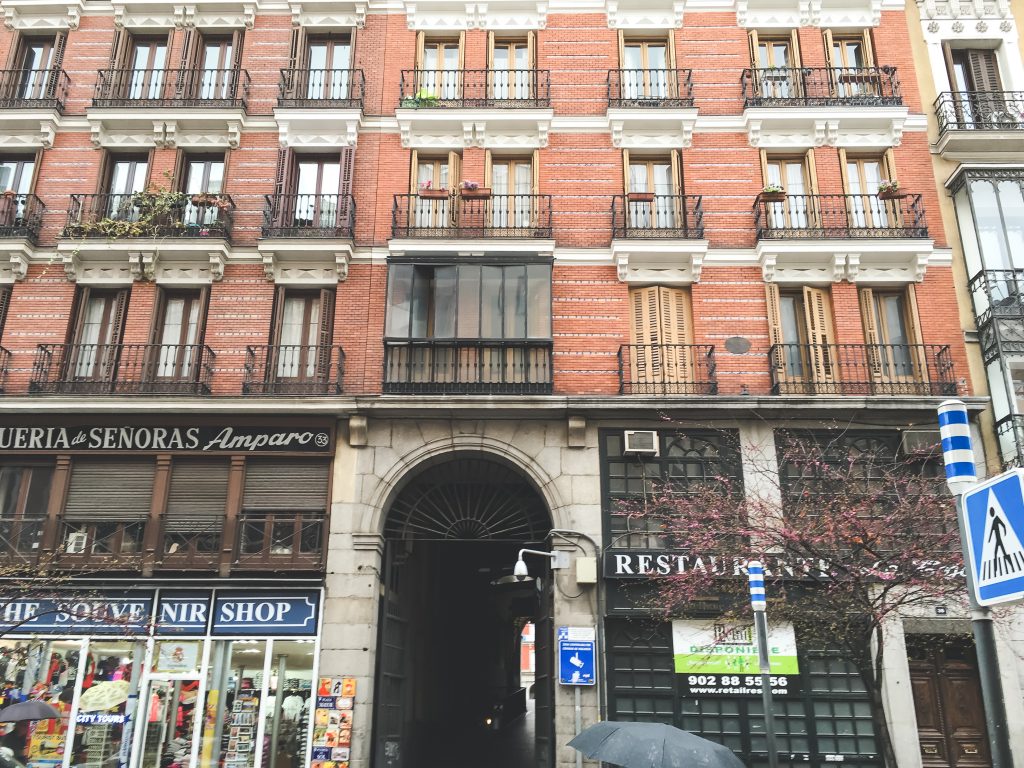 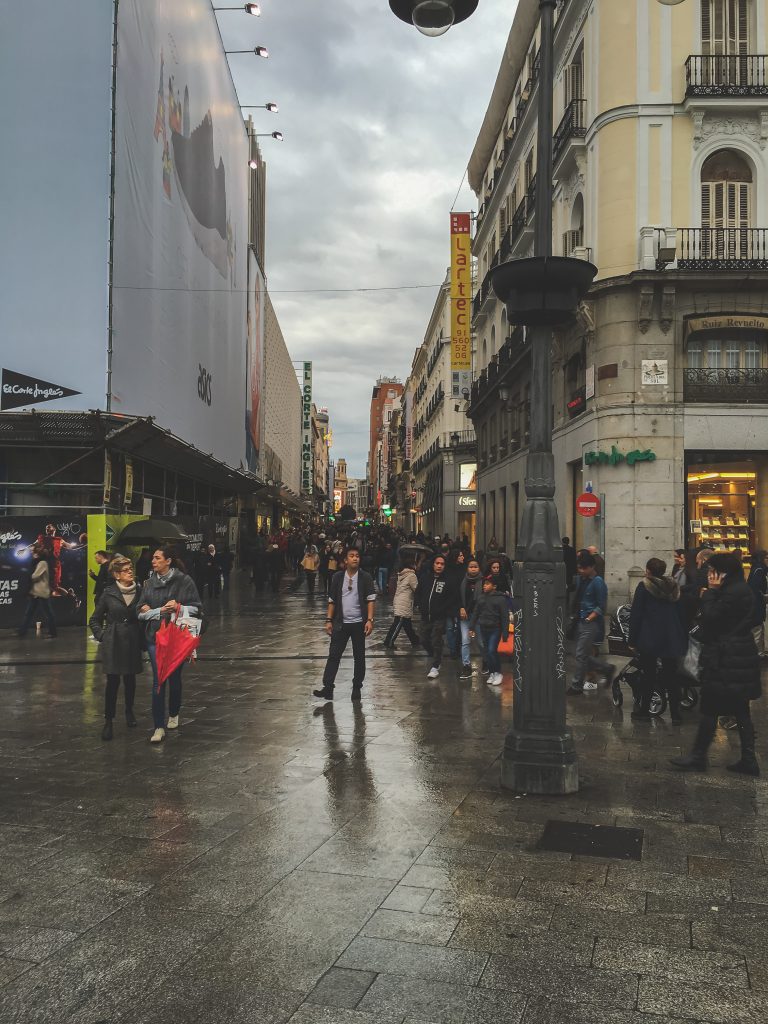 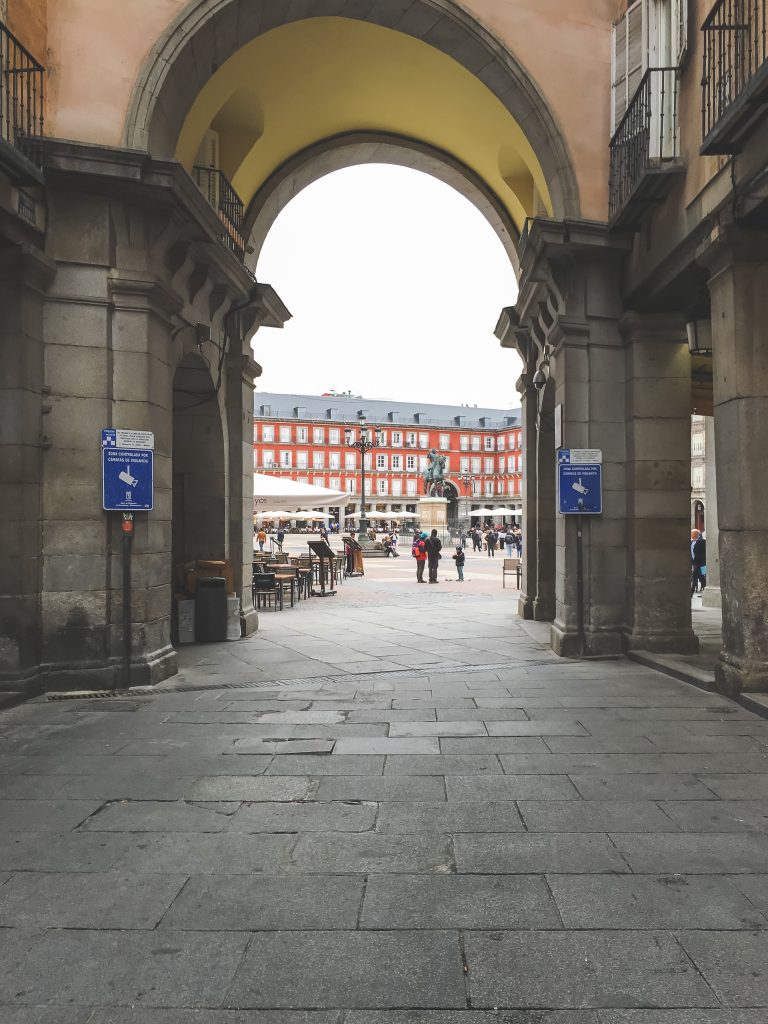 “Welcome, David, welcome!” said Josefina in 1989, as she ushered me into her Madrid flat. The mother of my host family, she proceed to talk to me in Spanish at such a high rate of speed that I smiled politely without fully understanding, not for the first or last time. I was barely a week in Spain, twenty years old, and bewildered.

Josefina lit another cigarette, sipped her 3:00 p.m. gin and tonic, and opened a fresh plastic bag of marinated green olives and she placed them on a coffee table next to bowls of chips and nuts all without breaking her stream of conversation. She was utterly elegant and completely in control of her family orbit, their second home in Madrid they were selling soon, and a farm seven hours north on the Atlantic coast.

My host family was affluent, gracious and generous. Of course, they insisted, David simply had to stay with us during his year in Spain, since my family had once hosted one of their sons in Southern California.

Madrid is the center of everything in Spain. It is literally the middle of the Iberian Peninsula, seat of its royal family, major European business center, and home of one of the best soccer teams in the world. Its residents are full of warmth, firm opinions and a kindness that seems unusual in an urban center. After being in Madrid you will want to act with such kindness to strangers in your own country.

But how central is Madrid? A Spaniard in another region might not feel so positive. On a weekend trip, my fellow American students and I stopped near Valencia on the Mediterranean coast and piled out of our rental car with an “M” on the license plate. “Madrileños!” shouted a hostile voice nearby.

In 1989, my twenty-year-old self was trying to figure out my own identity and my year abroad was a critical turning point. Thirteen years after the death of the dictator Francisco Franco, Spain had its own identity issues amid social upheaval and a relaxing of strict cultural rules. I saw this period through the eyes of this family and my own self.

“Vas a salir de España hecho un hombre,” declared the dad of my Spanish family. “You’re going to leave Spain as a man.” With the fifteen pounds that I had packed onto my frame by the time I left, he was more right than he knew.

Charla pulled her wool cap tighter over her head. The temperature dropped lower and the sky got grayer. What is the best way to warm up? Café con leche, of course! By this time, even I was admitting that we had eaten too much. So we had just one more bite and a glass of wine at another bar near the previous bar where we had coffee, which was after the other bar where we had those calamares.

Charla winced as she patted her stomach. I gave a satisfied smile. This time, just like decades ago, Madrid did not disappoint.

Next: You really can go home again, in any language.