Written by David in In the kitchen

So we are in mid-move and mid-summer. Charla is just days away from having to leave her house. We just signed the lease on the place next door. It is hot and humid. We are tired and grouchy. It may be Sunday, but we are not sure, so there is a chance that the next day is a work day. This is not good. What do we do? Make gazpacho!

Gazpacho is a cold tomato soup from Southern Spain, where the blazing summer midday heat slowly drains away your desire to do anything other than sleep, watch old movies, swim, and drink Cruzcampo beer, the Southern Spain low-alcohol equivalent to American lite beer. 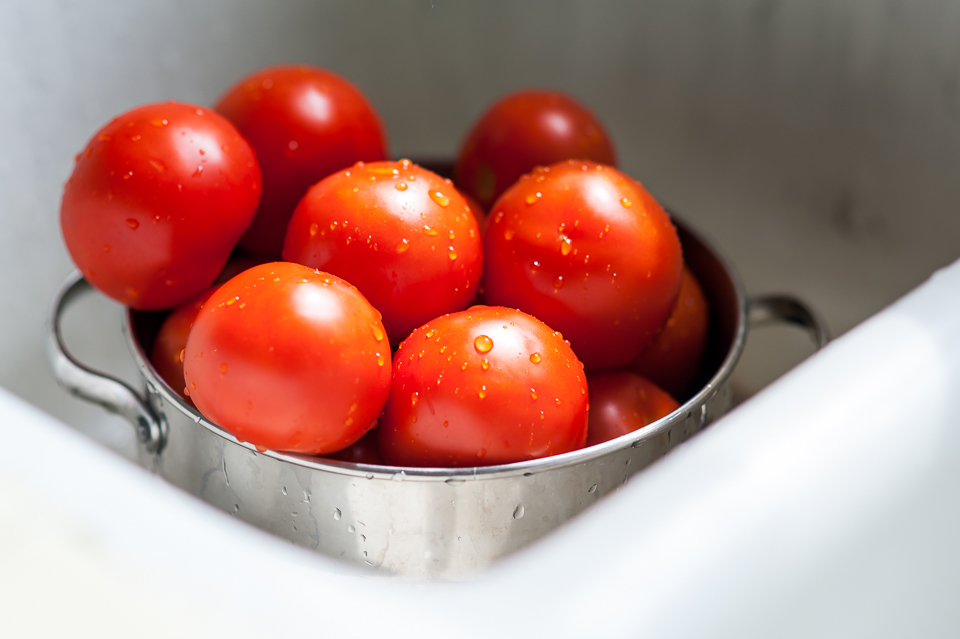 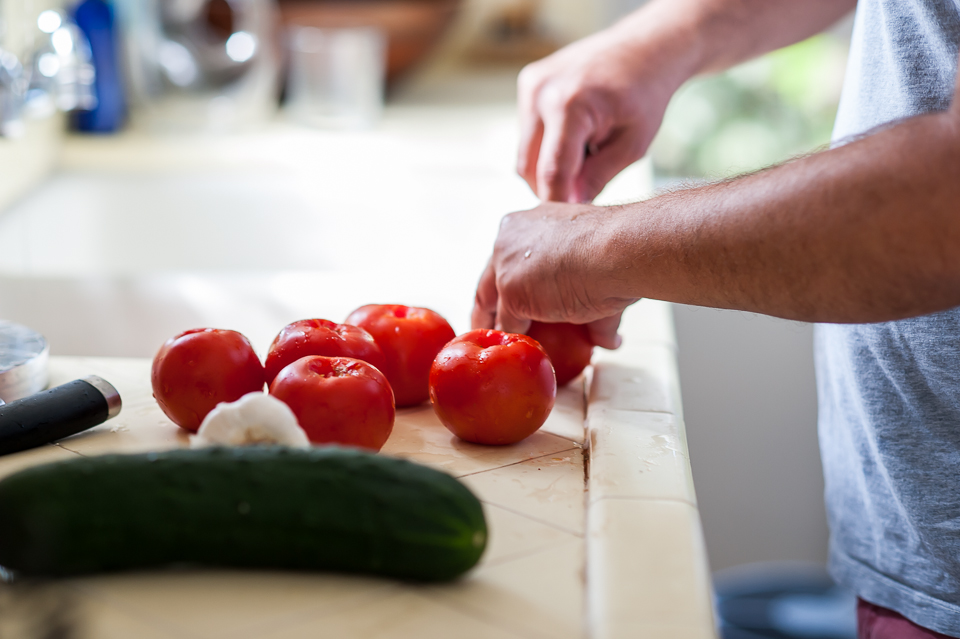 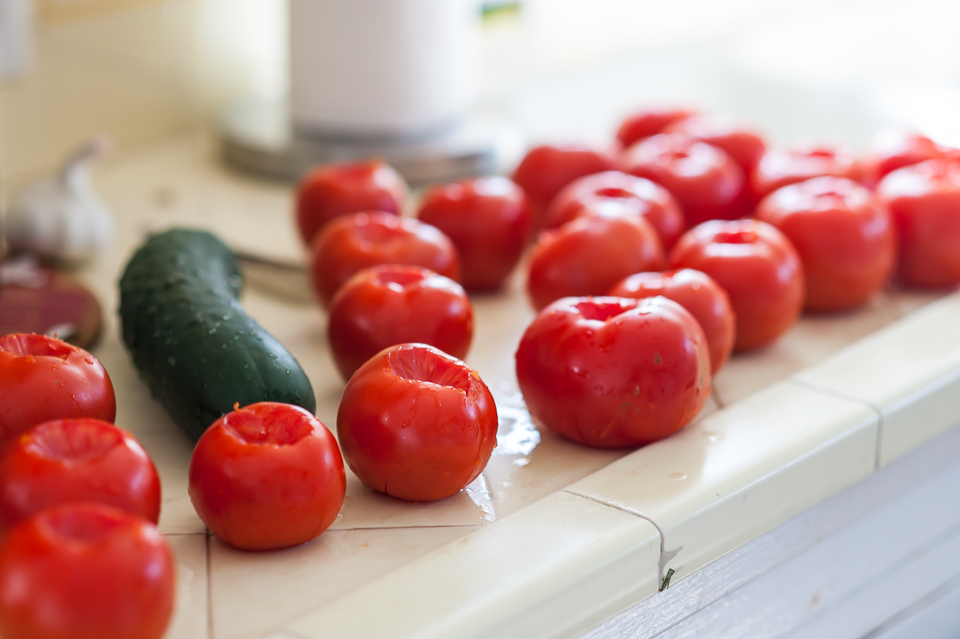 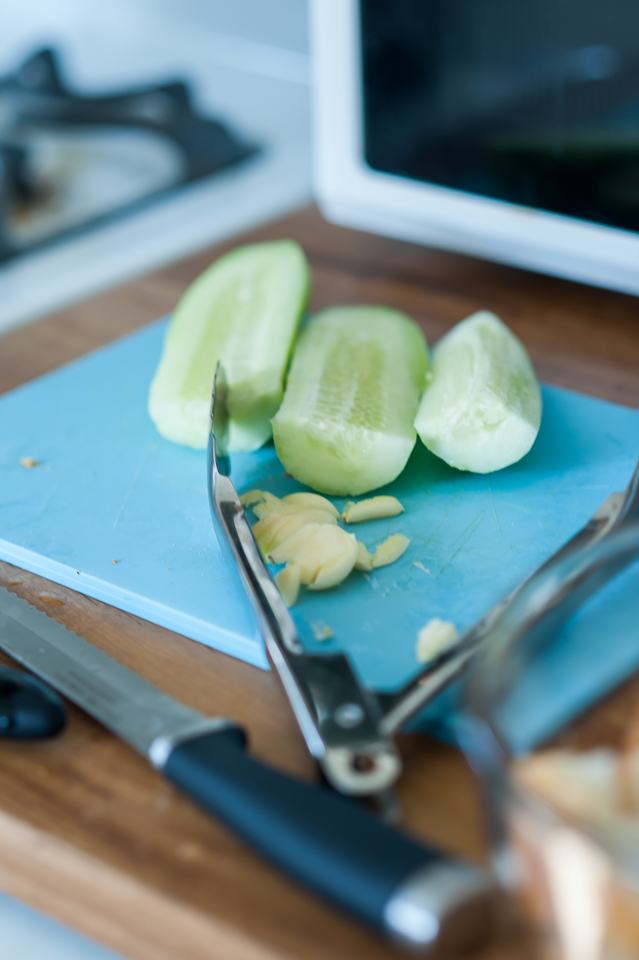 Traditionally gazpacho is a soup of pureed tomatoes with cucumber, garlic and olive oil and is a refreshing start to a nice lunch of roasted meats, paella, salads, tapas, or pretty much anything. On a hot day the thirst-slaking richness of gazpacho calls to mind the American poet William Carlos Williams, who was once caught in a weak moment:

This Is Just To Say

I have eaten
the plums
that were in
the icebox

and which
you were probably
saving
for breakfast

Forgive me
they were delicious
so sweet
and so cold

If you’re stuck with little to do – or little desire to do anything – you may want to pull up a movie to go with your gazpacho and a sandwich. The legendary Spanish director Pedro Almodovar directed some outrageously scandalous films, but he then broke into mainstream American cinemas with Women on the Verge of a Nervous Breakdown.

In the film, a woman has trouble falling asleep because she is in the middle of a break-up. She makes gazpacho in her blender, much as you are doing here, and then adds sleeping pills to it. Watch the film and find out what happens when other characters drink it instead and pass out. Meanwhile, chaos reigns among a love triangle, an engaged couple falling apart, a terrorist threat at the airport, a woman whose boyfriend left her for another, a taxi driver who loves mambo music, and an urban sunrise in 1980’s Madrid where Spanish actress Carmen Maura crosses an empty street staring into space and wondering where her life just went. 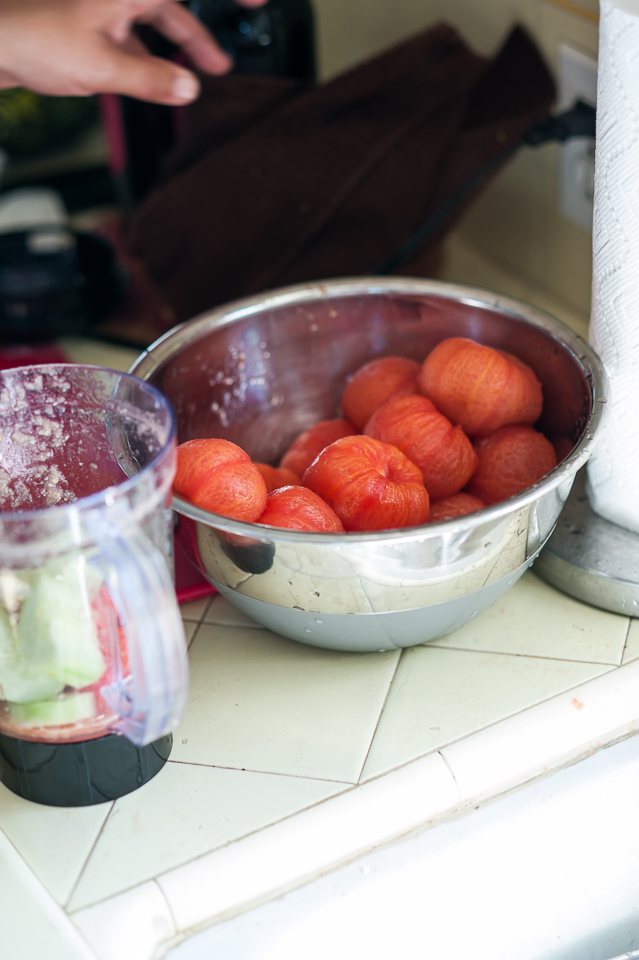 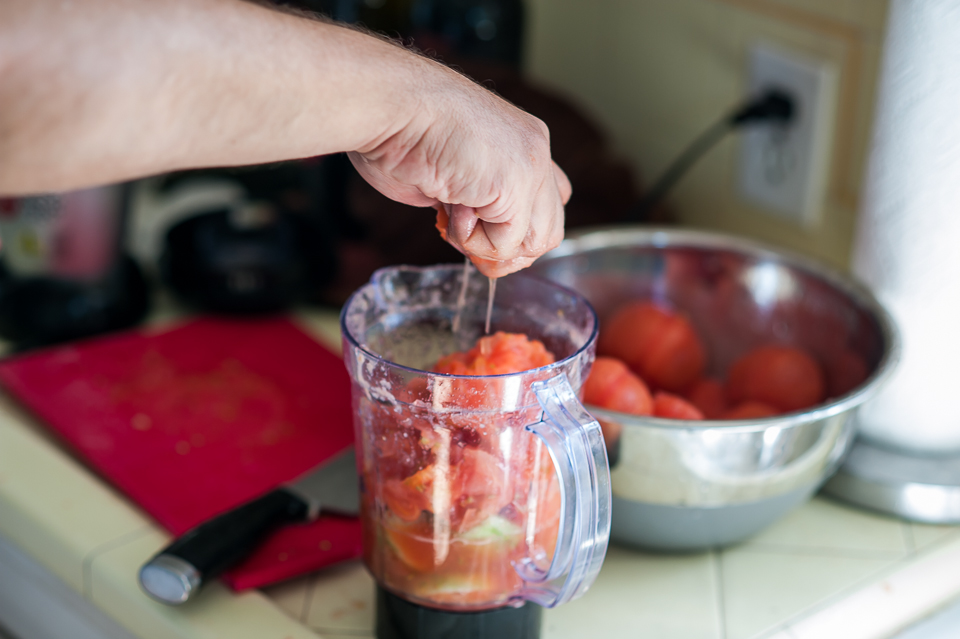 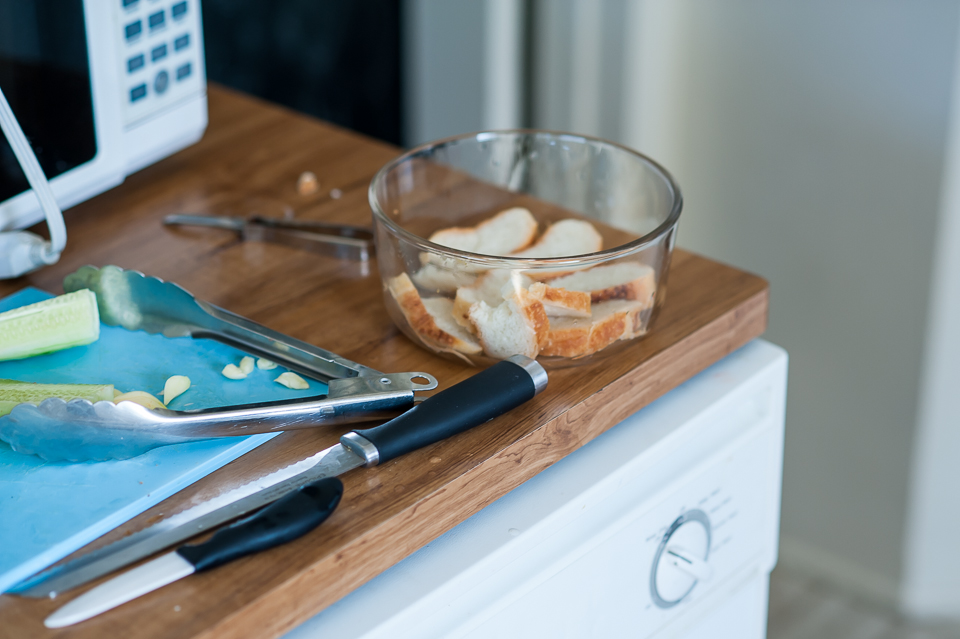 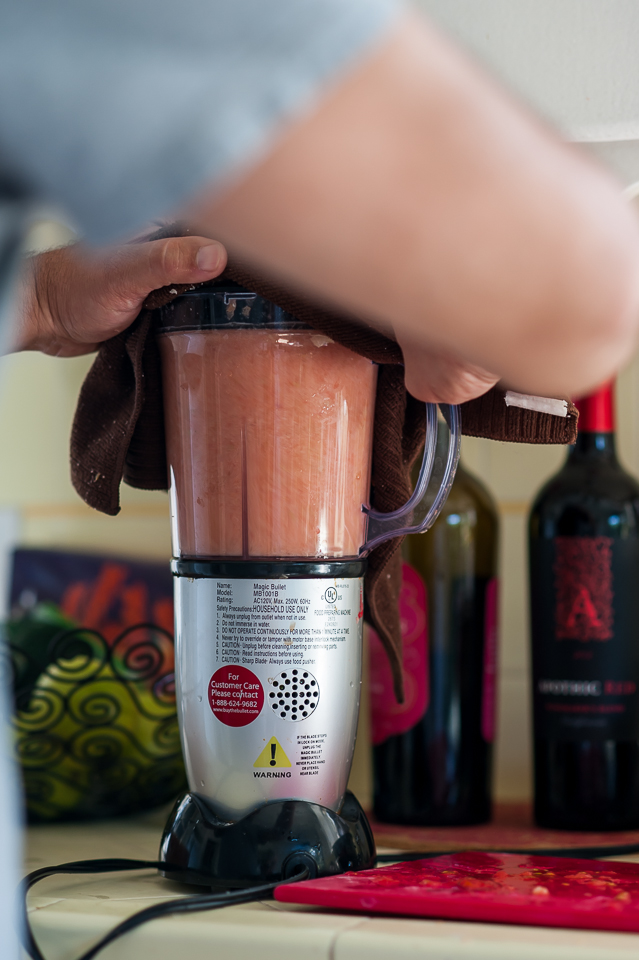 In a restaurant, you will be served an elegant gazpacho that is strained so that thick chunks of vegetables and bread do not stick out. That is done easily enough at home, however you may quickly find that it is not necessary.

Gazpacho is traditionally thickened with pieces of bread or baguette. Other, modern and more Americanized recipes may remove the bread, or may add distinct non-traditional things like avocados, salsa, Tabasco, and radishes. This is up to you, and you should experiment with different versions of your gazpacho as long as the dog days of summer are upon us.

The word “traditional” in cooking pops up a lot in this blog entry, and is a funny thing in Spain. One quickly gets the sense that there are right ways and wrong ways to prepare and serve certain foods – paella, gazpacho, even coffee. This is not a bad thing, and traditions are comforting parts of our life. They are security and they are the knowledge that, despite all that is going wrong in the world, things are going to be okay. Sometimes traditions are there whether you want it or not.

A number of years ago at a Sunday lunch with friends in Northern Spain, my sister fresh off a mild hangover asked for coffee. “Cafe con leche”, she virtually begged the waiter.

“No,” he insisted, scandalized. “We are serving lunch.” Oven roasted chicken over rice. About a dozen people in our party.

“No,” he said firmly. “We are serving dessert.”

“Cafe con leche,” she said one more time as the waiter cleared our dessert plates. He smiled and brought two hot pitchers. From the first pitcher he poured her freshly brewed coffee and from the second he pour an equal amount of hot milk. She made it.

Traditions are many things, but they are not rules set in stone. So try your gazpacho a few times. Try it strained and unstrained. Add a dash of Cholula, chopped onions or green onions. Pull up an old movie and enjoy your Sunday. It is in fact Sunday, isn’t it? 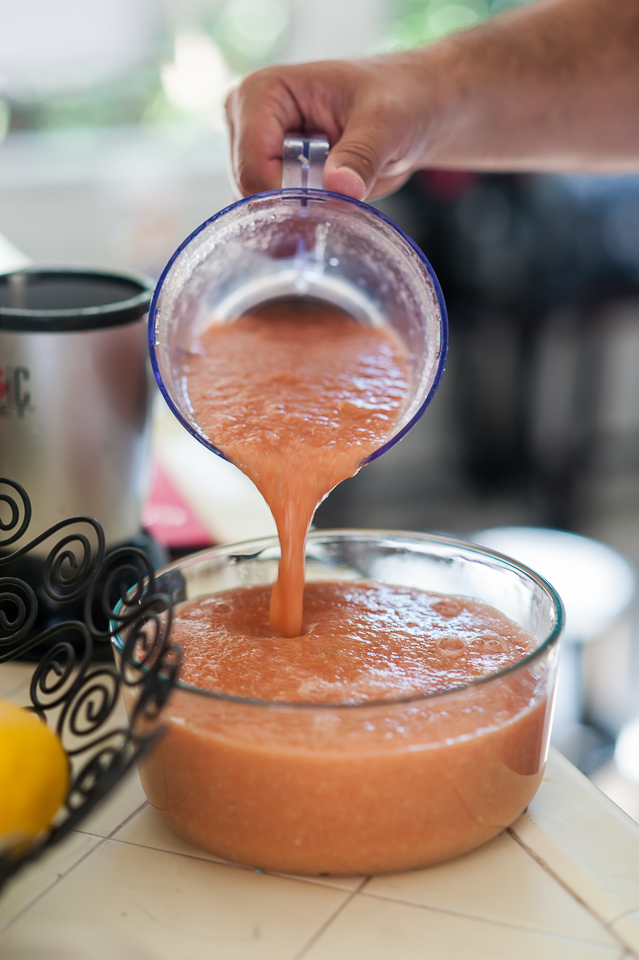 Set a pot of water to boil. Using a paring knife, carefully cut away the top portion that was connected to the stem. Cut an “X” on the bottom. When the water boils, drop in the tomatoes. As you see the skins pull away from the flesh, remove from the boiling water with tongs. Allow tomatoes to cool or place them in cold water or ice. Pull the skin off the tomatoes and discard. Cut into quarters. If they are fresh summer tomatoes, then don’t let the juices drain away.

Peel the garlic cloves and set aside. Put the slices of bread in a bowl and add just enough water to soften the bread completely. Peel the cucumber and slice it lengthwise. Chop the cucumber in to pieces about the same size as the tomatoes.

Ready your blender. In roughly equal batches, add the tomatoes with juices, cucumbers, garlic and bread. Blend until smooth.

Optional: Run the pureed soup through a strainer or china cap/chinoise for a smoother and more elegant soup. If, like me, you can’t wait then you can safely skip this step.

Add 2-3 TBSP of very good extra virgin olive oil and salt and pepper taste. Chill the soup for about 30 minutes.

Really, there’s nothing more to it. Pour it into a bowl. Sit outside on a hot afternoon with a friend. Have some wine. Enjoy the soup. Put something on the barbeque shortly thereafter. However, you can add different toppings to the soup once it is served:

When you think of it, gazpacho is not much different than a pizza in the variety of things you can put on top of it. Only it’s cold. And it makes you want to either catch the next flight to Spain or take in a Pedro Almodovar movie, neither of which is a bad thing.