Introducing: “Travel Where You Live”

“We travel to faraway places because we expect holidays, recovery,
adventure and new experiences. But is that always necessary?”

Sometime after I graduated college and entered the real world, I learned that my sister once woke up from a bad dream where she saw me slaving endlessly in a tiny space, working for faceless bosses and unable to live a life of family, friends and much else. Little did she know – little did I know – that I would in fact spend many of the following years realizing that nightmare, in one soulless corporate cubicle job after another. Happily, that is not longer the case.

While good for an occasional laugh, corporate life too easily carries over into personal life with its necessary routines and structures. We do of course need routines and structures; ask me again about that at 7:45 a.m. while we try to get two girls ready for school and not be too late for work. But then what?

The modern work world’s answer to that dilemma – vacation – is just not enough. Vacation means travel which means expense which is not always doable. So we take staycations instead. And yet…

As much as we love travel, we just cannot do it every day. Or can we? Here at So There’s That we are proud to introduce a new section, Travel Where You Live, which invites you to take the wonder of traveling to a fun, different, exotic place and imagine that mindset and that feeling right here at home. Right outside your door, in fact.

German filmmaker Sebastian Linda created a short film called “Travel Where You Live”, which is a rich, luscious view of panoramic nature scenes, urban shots, parkour competitors, and more on top of a dreamy soundtrack that makes me want to hop a plane to Saxony, in eastern Germany where he is from.

How exotic. And yet for him, Saxony may be little more exciting than the suburbs for me. He asks,

What if we explore our home once again?
In our case, Saxony
Where I thought I have seen it all
But I guess I should have known better

On a sunny winter Saturday, we bundled the girls into the car and drove 20 minutes to Anaheim. We skipped over Disneyland and landed into two amazing places which opened our eyes. They will open yours too, as they represent the future of what our world will be like when our girls are adults. 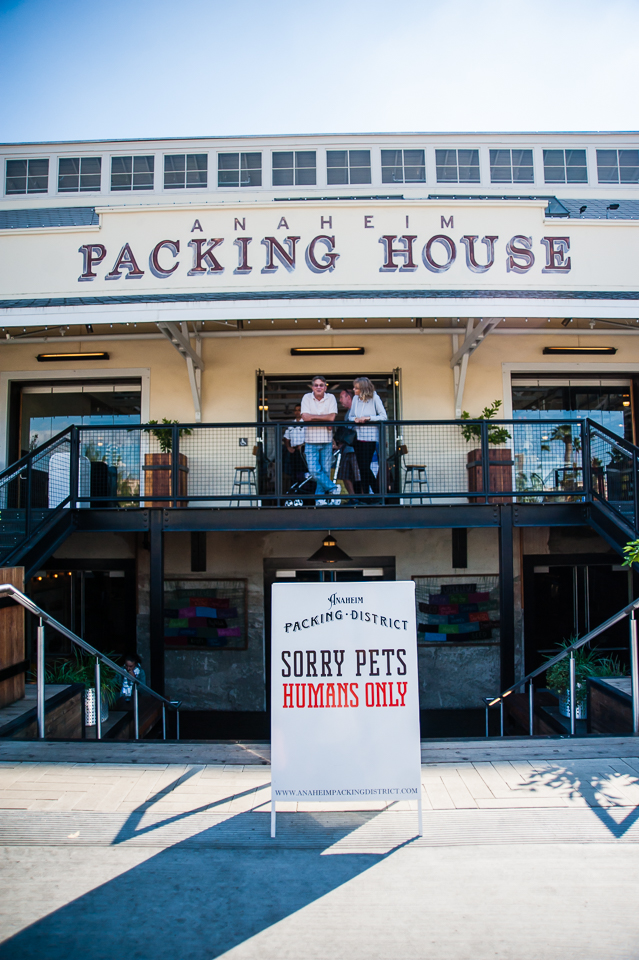 In 1925 the Packard building took shape with gorgeous mission revival architecture in a time when Orange County was full of more orange groves than suburban enclaves. Now the building anchors the Anaheim Packing District, a loose cluster of buildings and friendly parks in downtown Anaheim close to its city hall. The building was remade into a modern commercial center full of artisanal retailers and food vendors that reflect the growing demographic diversity of Orange County. Don’t call it a mall – though it has many retailers in it. Don’t call it a food court – there are no chain stores selling cheap deep-fried yuck on a stick that you might find at every regional mall in the U.S. built after 1984. 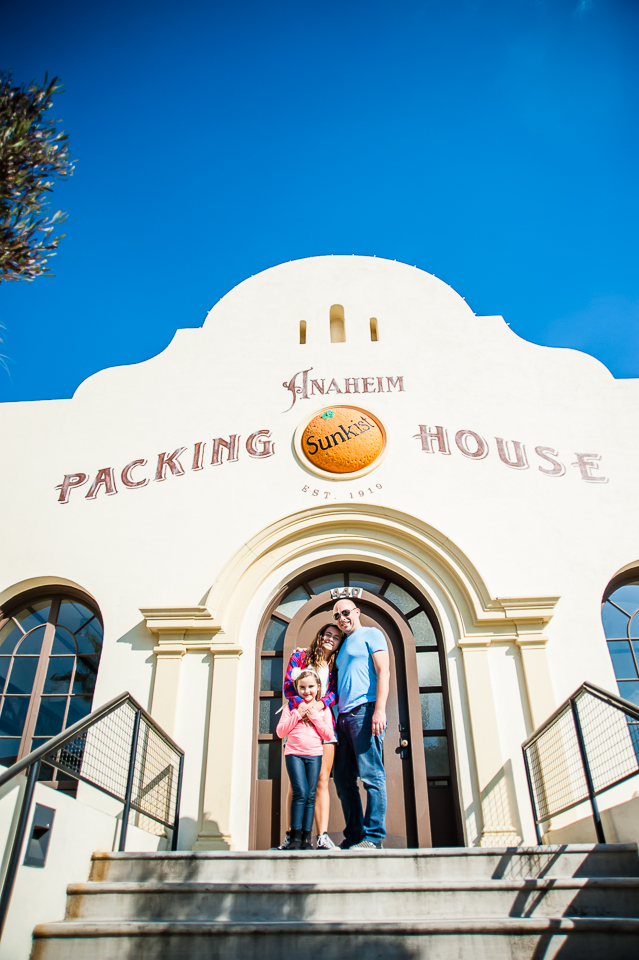 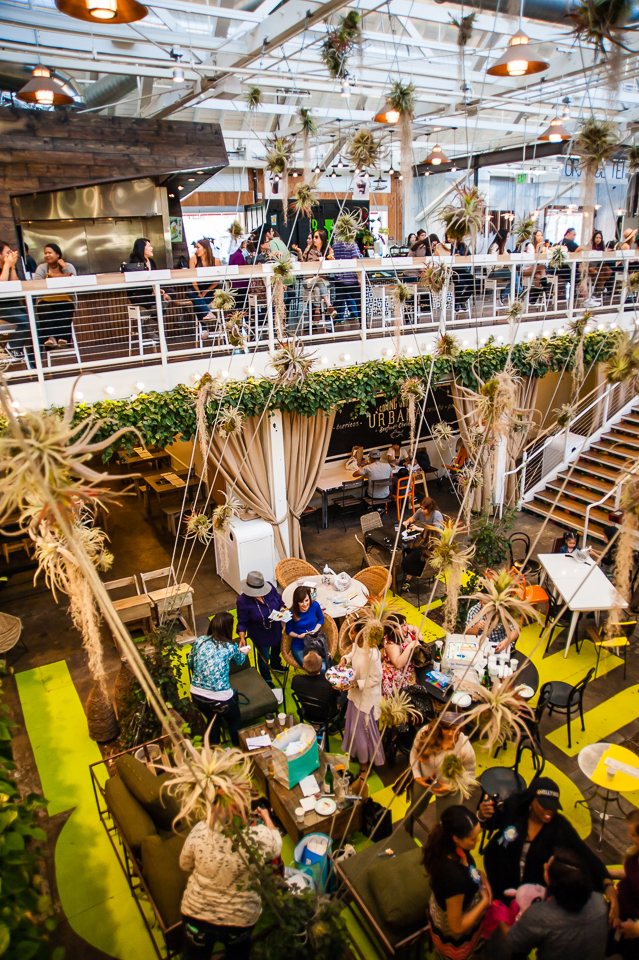 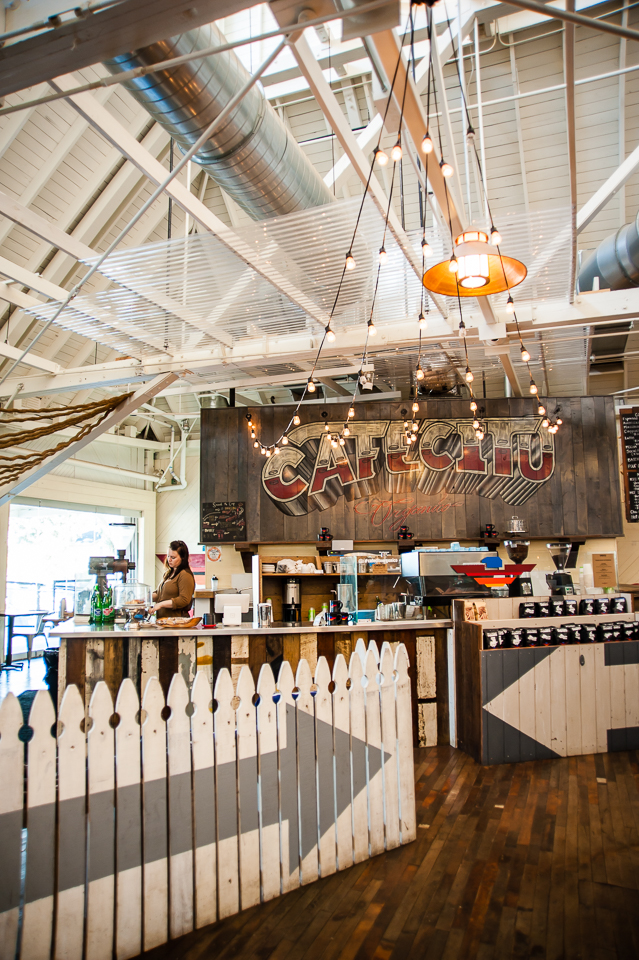 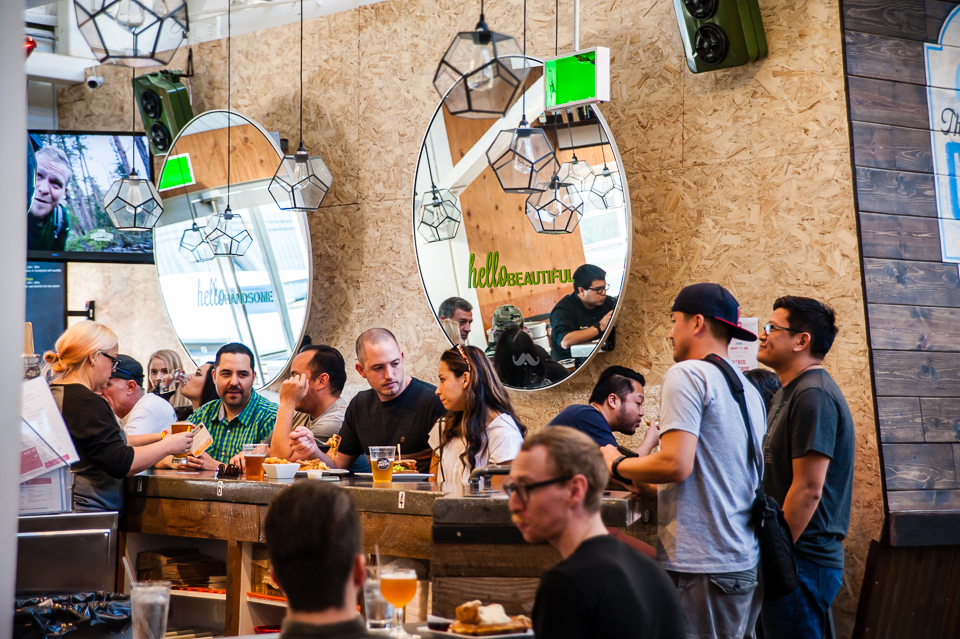 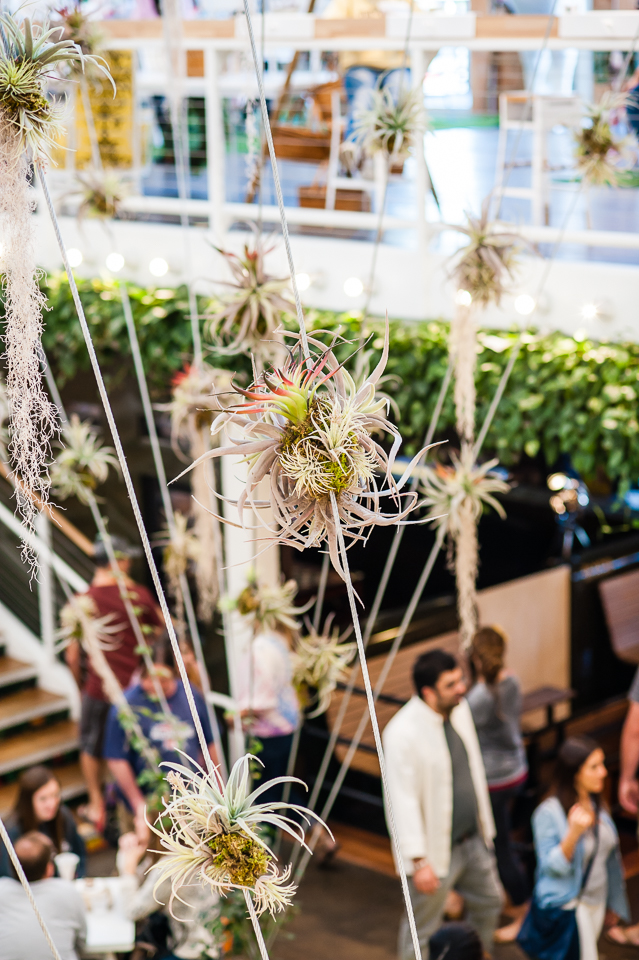 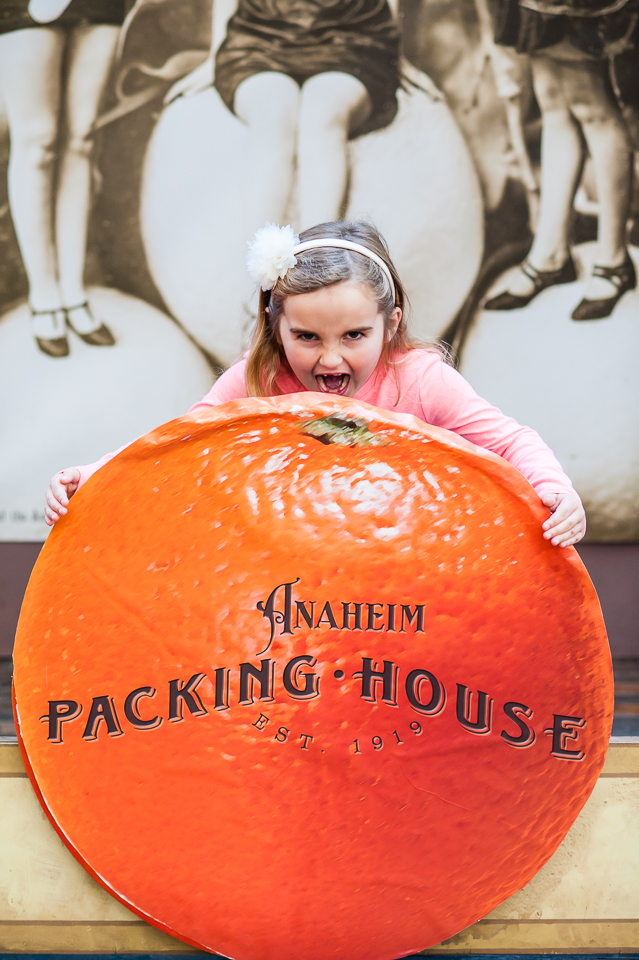 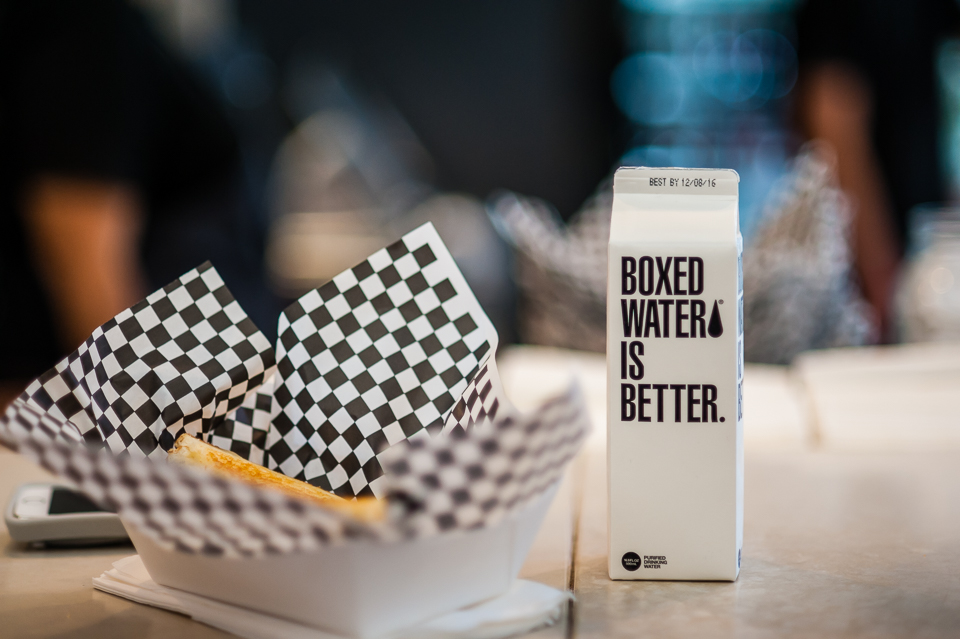 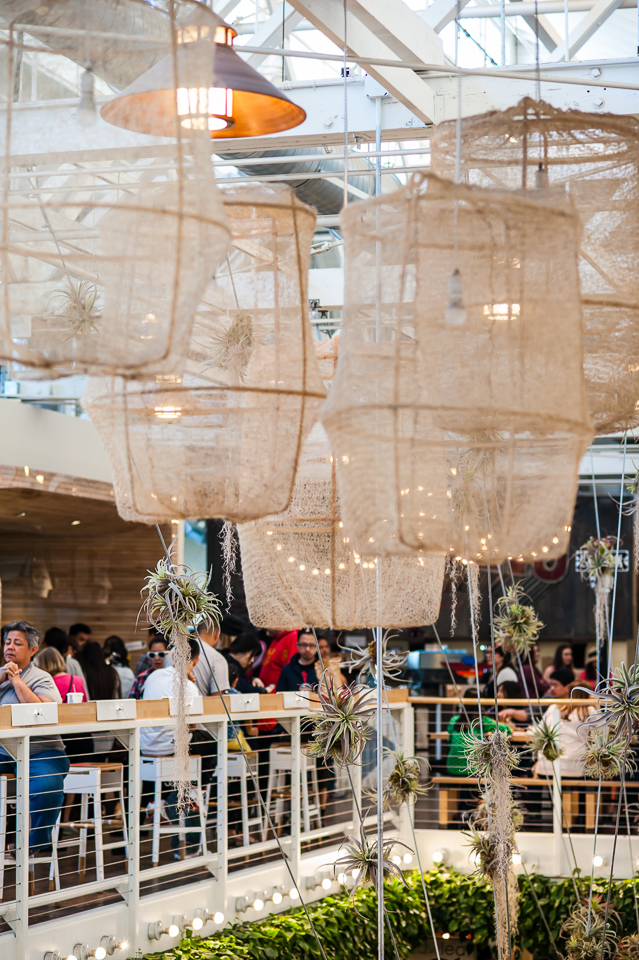 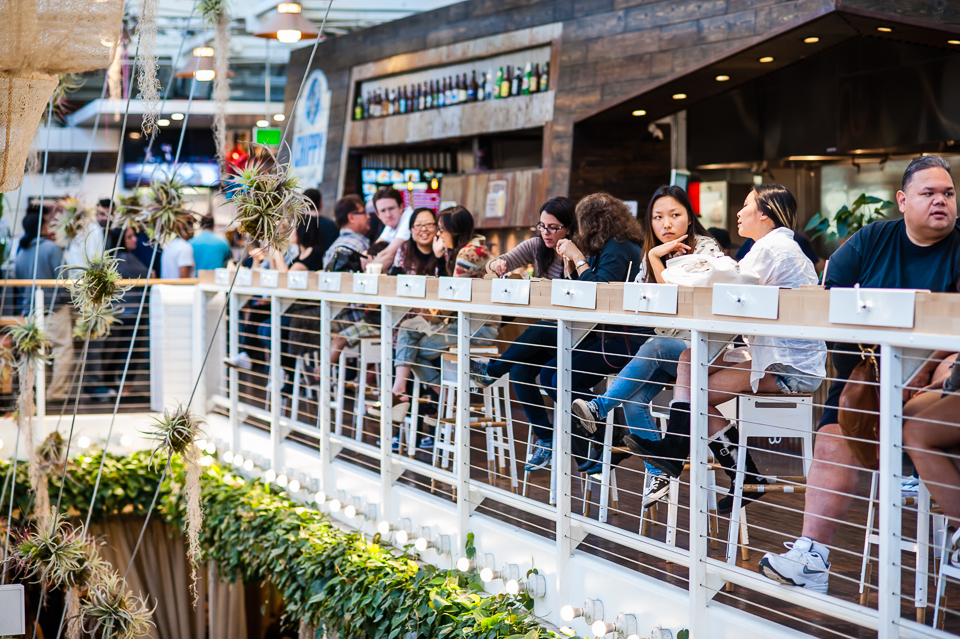 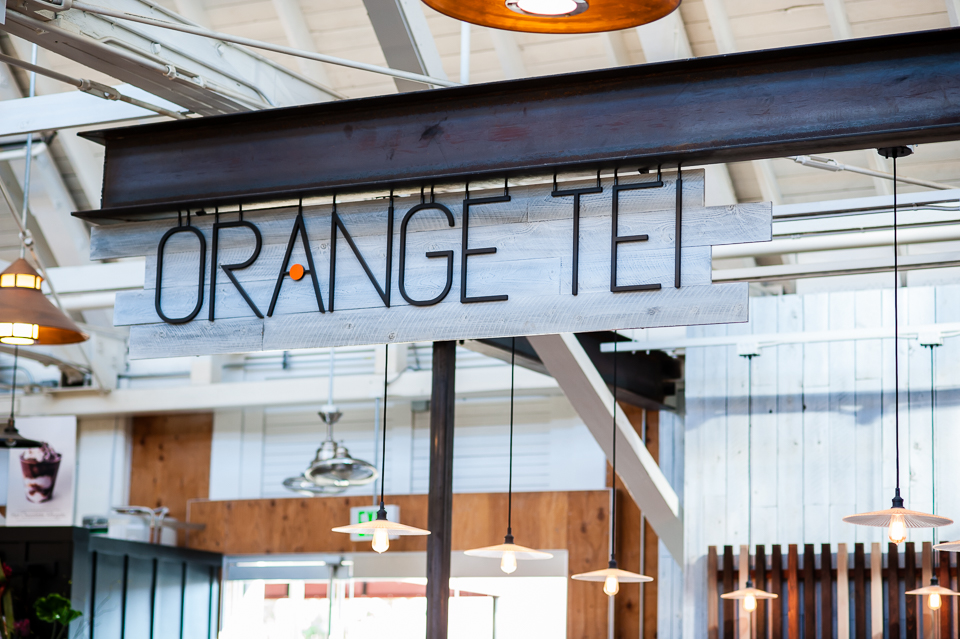 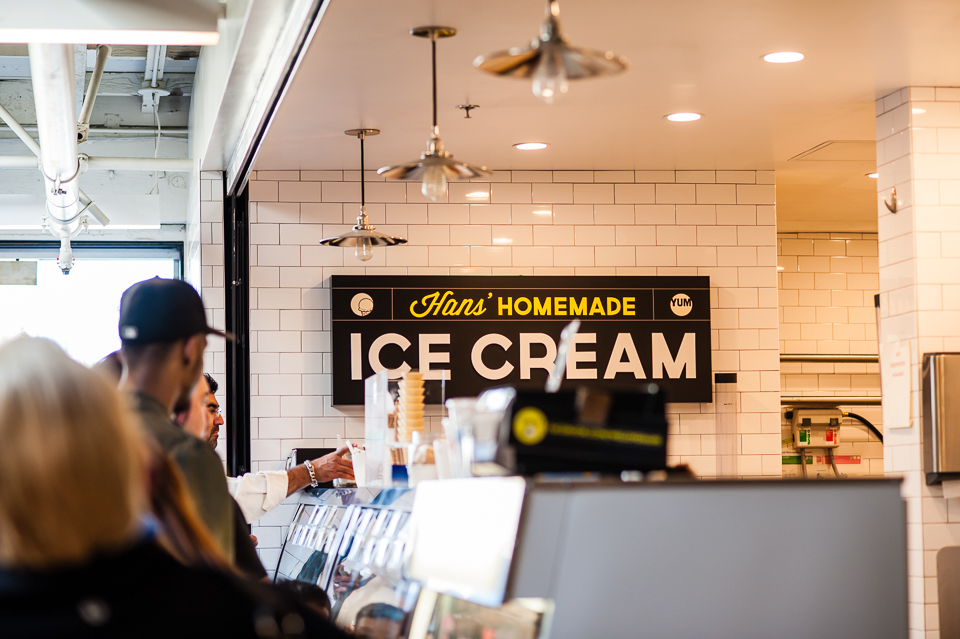 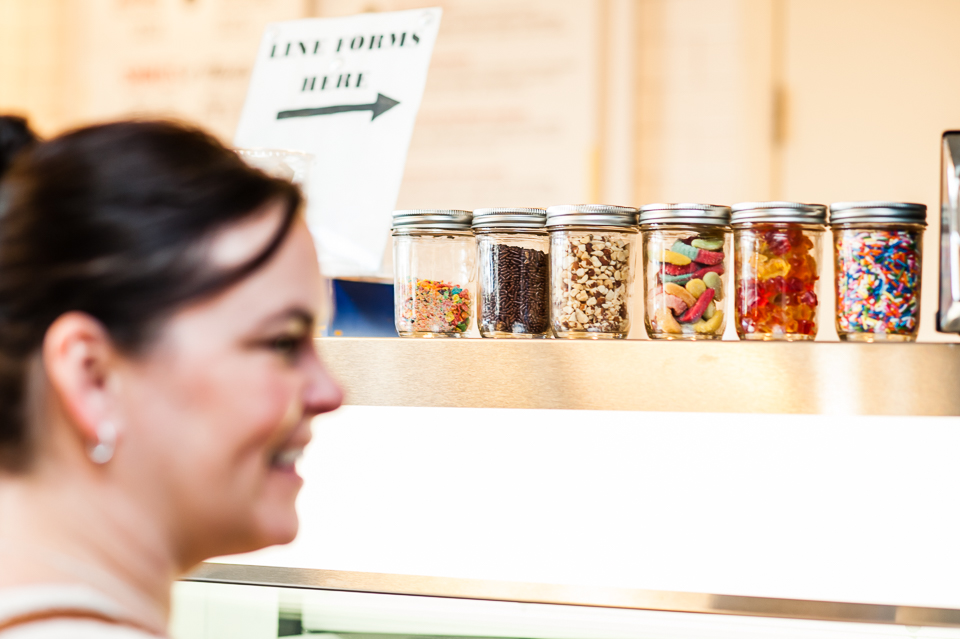 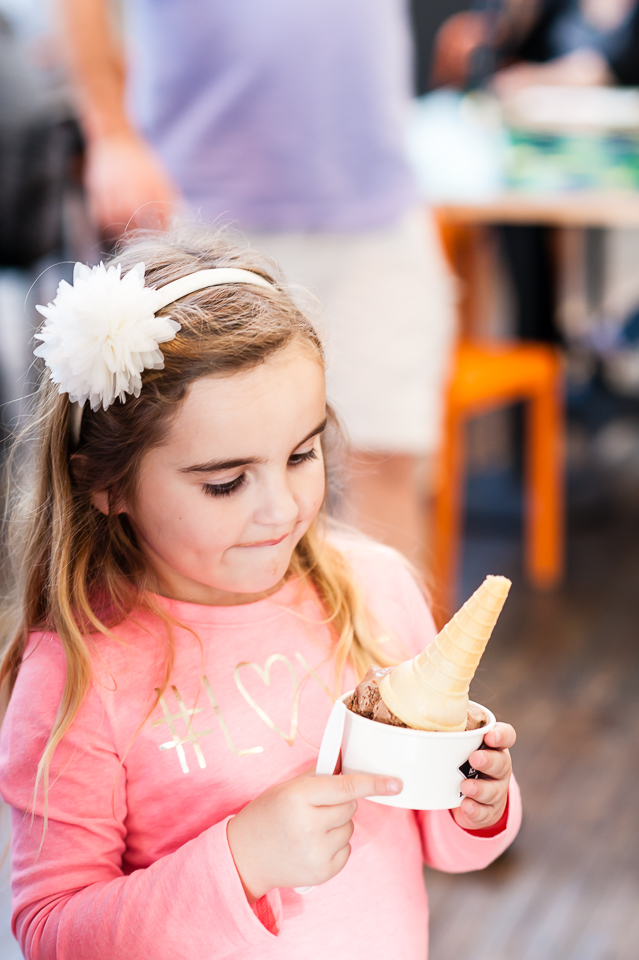 The Packing District is smaller, more human-scaled, and fits perfectly in with the dense buildings of downtown Anaheim. This may be the future of malls – smaller, more compact, better fitted into the community – as cities are struggling to figure out what to do with their dying regional malls. Just look to dead malls in cities like Hawthorne, Calif., to see the past while the Packing District is the future. 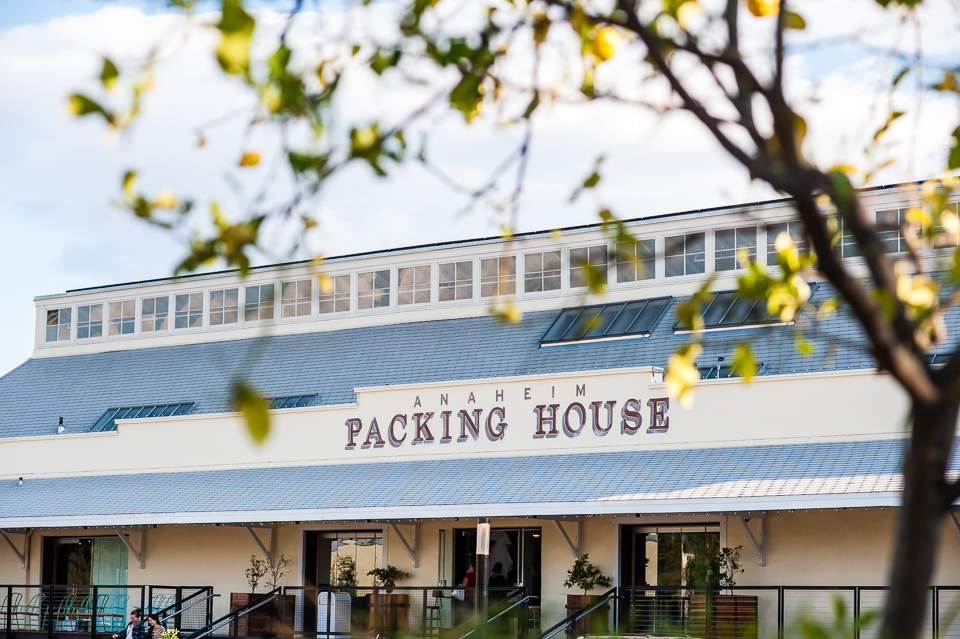 The heavy crowds and lines at tempting and delicious food stalls suggest that the public is hungry for something different and more relevant. After our lunch of Vietnamese pho (pronounced “fuh”. I actually wanted the poutine, but the 30-person line was moving too slowly) we got ice cream and sat in lounge chairs in the tiny park just outside.

The beauty of traveling where you live is that you don’t have to see it all in one visit. It is better, in fact, not to. Rather take in a bit now and then come back some other time. On our next visit to the Packing District I’ll try to get in line for the poutine and then we’ll check out Muzeo, the museum and cultural center just a few steps away.

Leaving the Packing District, we drove past attractive rows of newly build homes clustered close together like townhomes or East Coast brownstones, interspersed with tree-shaded walkways and street lamps, side by side in a way that a planned suburban housing tract cannot legally permit.

“I want to live here one day,” Juliana said.

A few miles away we stopped at the unlikely named ARTIC, a train and bus station that opened just at the end of 2014. Because this is Southern California, it is a rare spectacle for a train station to be celebrated with a grand opening, community events, and galas.

We are thankful that it is referred to by the artsy-sounding “ARTIC” rather than its actual name, Anaheim Regional Transportation Intermodal Center. The building is an architectural gem, with arching glass ceilings reflecting the afternoon sun and basking the interior with a warm glow that welcome travelers connecting to Anaheim, and yes, Disneyland, but also San Diego, downtown Los Angeles, Santa Barbara, and points everywhere else. 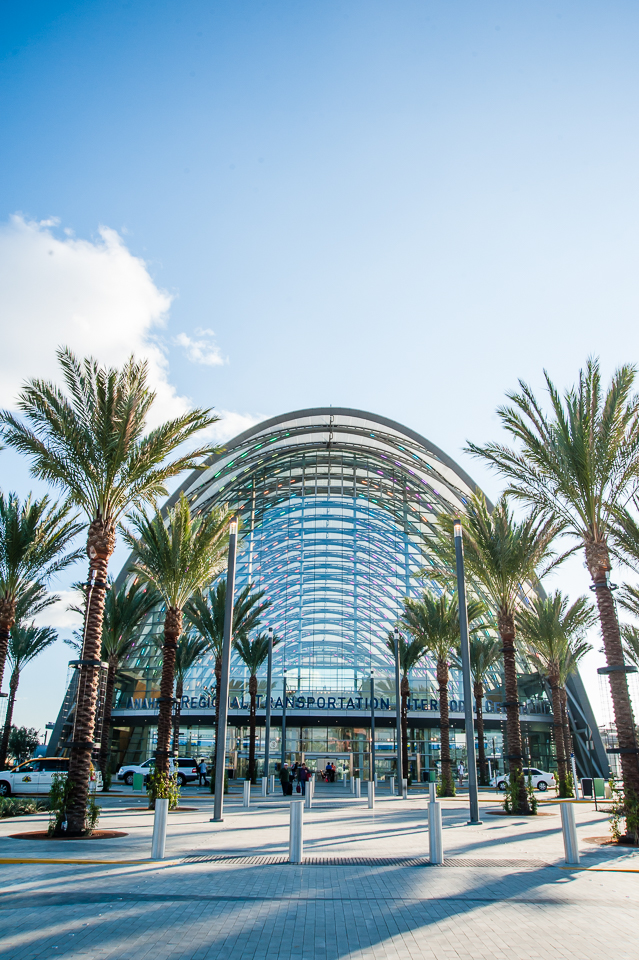 ARTIC is an ultra-modern space newly open to help travelers get to where they need to go when they don’t use their car. The building is so new that restaurants and concessionaires for travelers still haven’t fully opened up. And yet the station is full with promise and optimism that the official word “intermodal” somehow cannot describe. The front of building shows glass walls and ceilings arching skyward like the nearby Crystal Cathedral – undergoing its own changes and renamed the Christ Cathedral – while the side of ARTIC has a funny shape that reminded a local media critic of a “neon half-armadillo”. 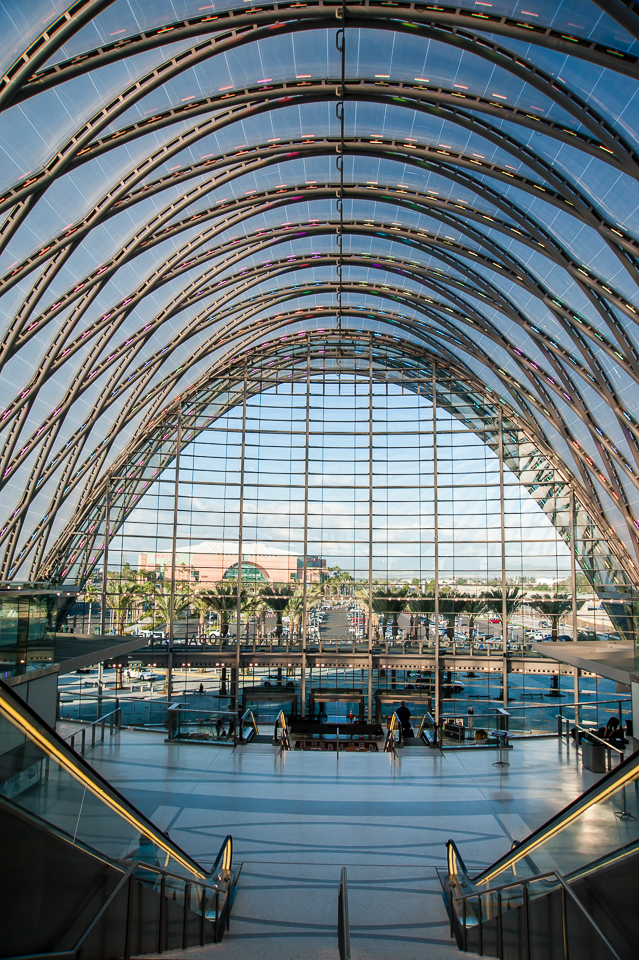 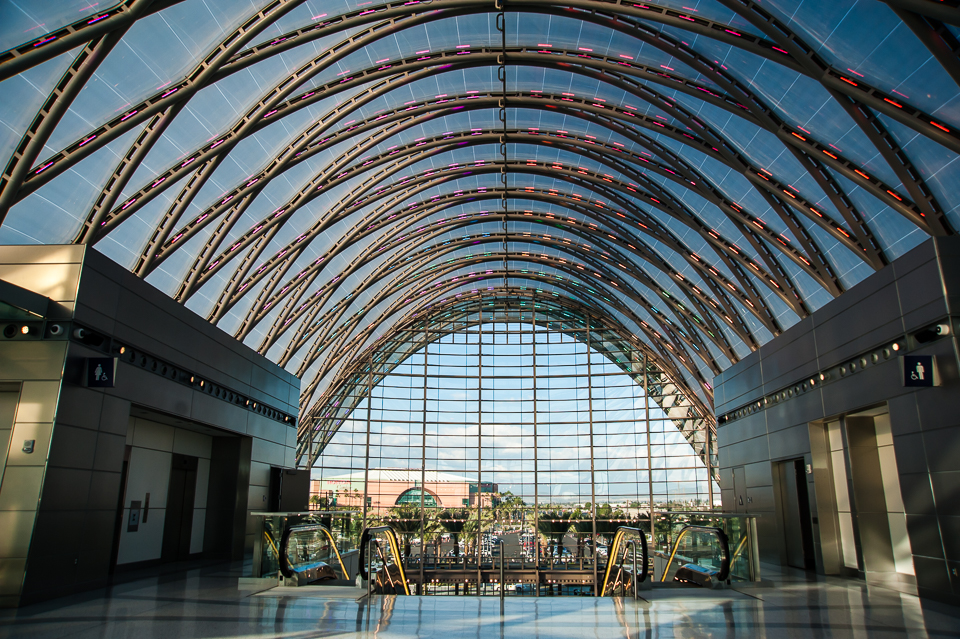 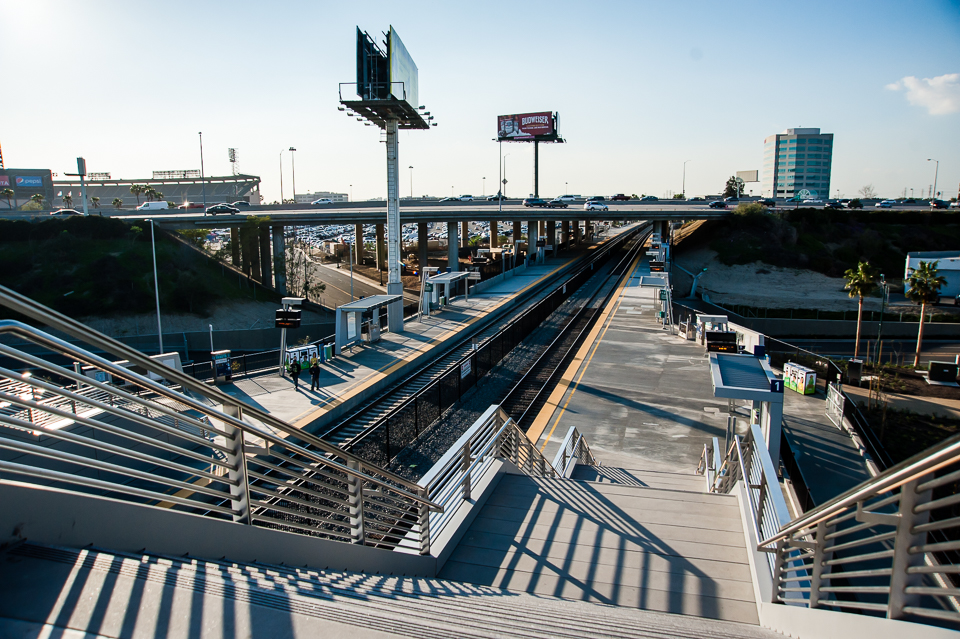 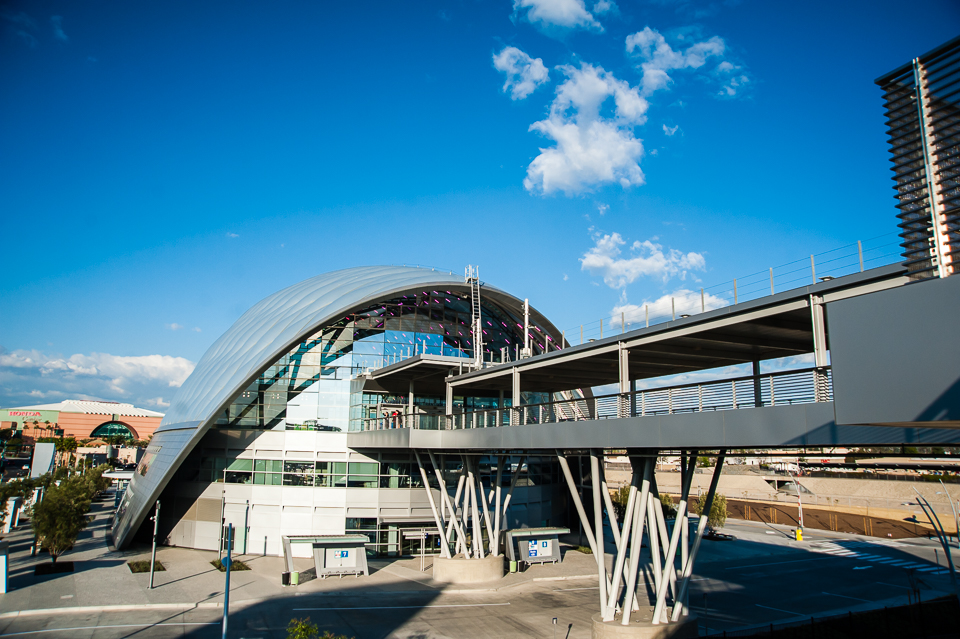 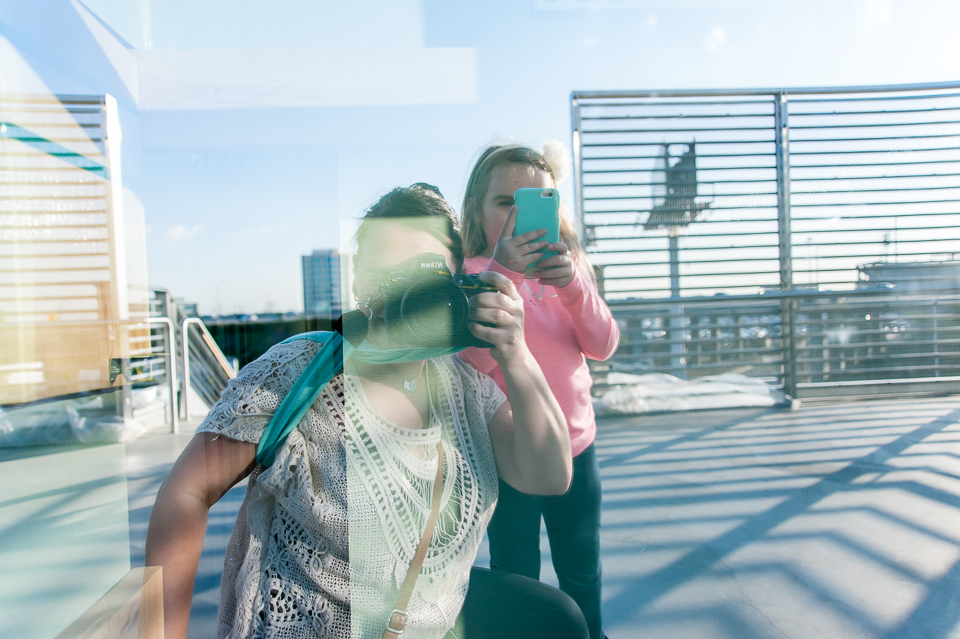 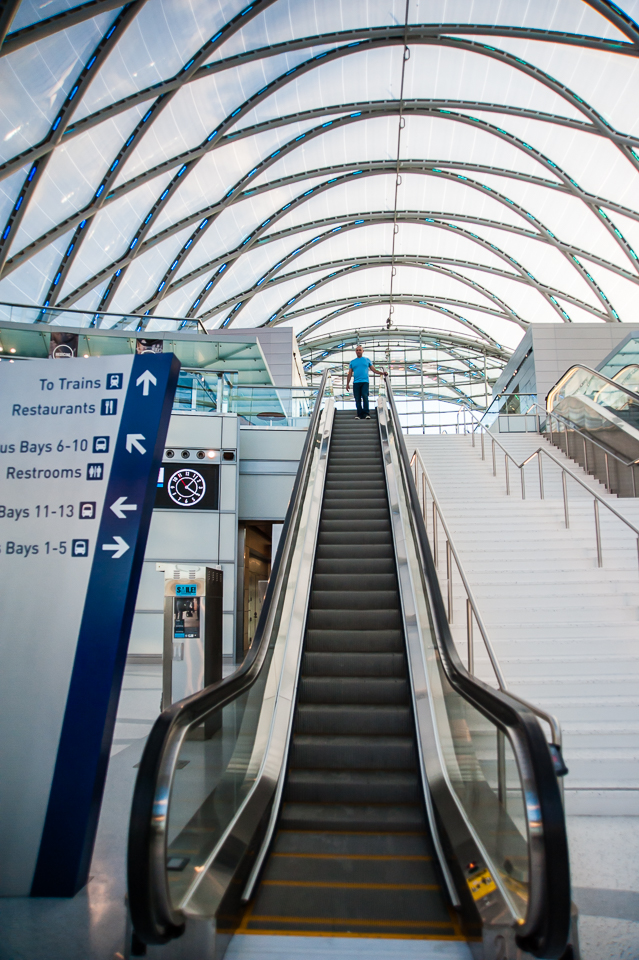 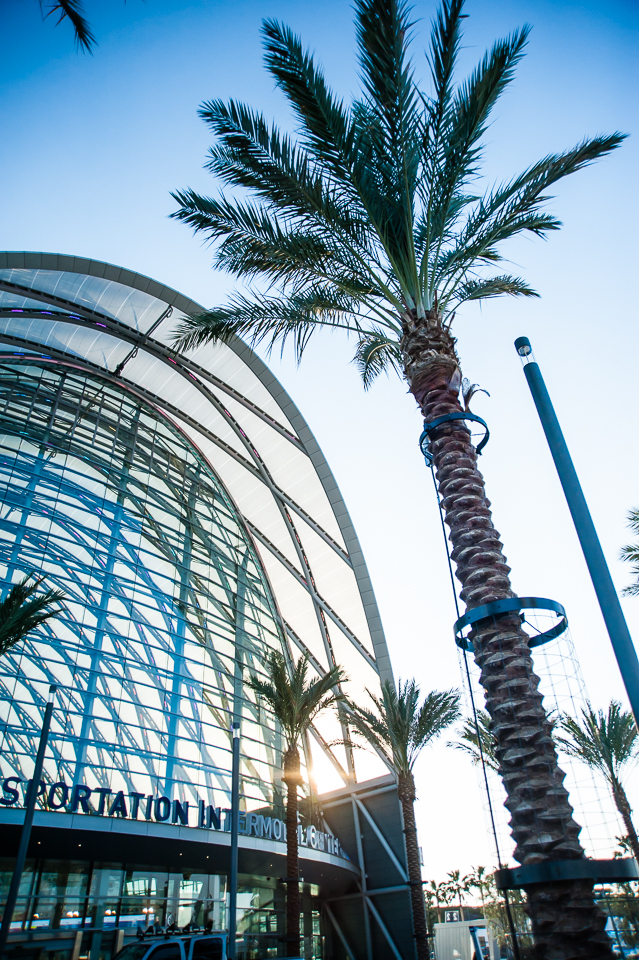 The ARTIC website has a page dedicated to hope for its own future. It imagines a proposed streetcar system in the city of Anaheim and it envisions a future train to Las Vegas, that Disneyland for adults. It even leaves a placeholder for the politically controversial California High Speed Rail, seeming not to care that conservative Orange County is not exactly a hotbed of support for bullet trains crisscrossing up and down California.

Local media and others complain about it as a pork-barrel project that is lacking in, well, commuters. Maybe. New York City faced the same problem and same critiques when building its famous subways. Sure, Anaheim is not New York but a train station can dream, right? The tracks are already there, pointing the way to the future.