Written by David and Photography by Charla in Long Beach, Wine & Dine

Just a few days away from the longest day of the year and the start of summer, we celebrated the end of school by walking to Long Beach’s epic Second Street, the relentlessly beating heart of Long Beach’s Belmont Shore. A few years ago I lived in the heart of The Shore, just steps away from the Pacific Ocean and even fewer steps away from Starbucks and the newly relocated local bookstore Apostrophe Books. More on that in a minute. But I visited my Starbucks with pride. After many years of angrily bashing corporate coffee while I lived in the San Francisco Bay Area, I have come to love Starbucks whenever I am not in a country where coffee is a religious experience. 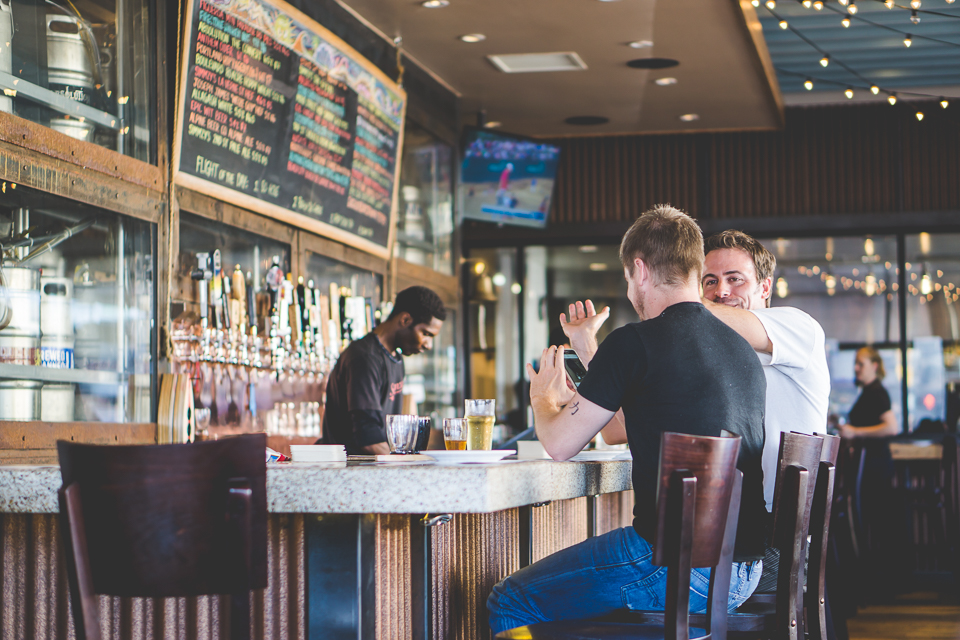 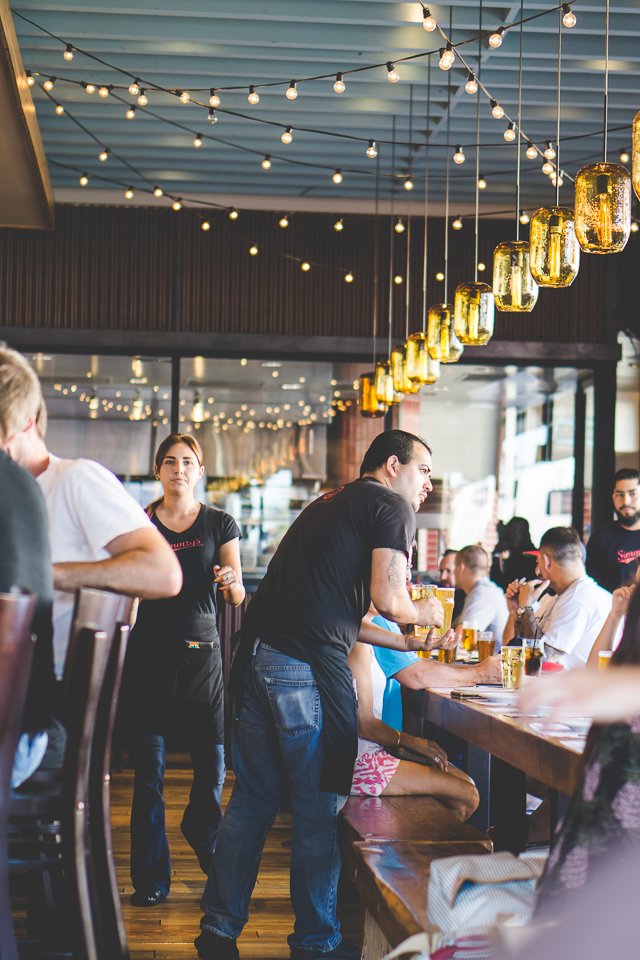 And that is the allure of Second Street and Belmont Shore. People are passionate about their street, their favorite stores and restaurants, and their Long Beach gossip about who is vacating which storefront in order to make room for, well, who exactly?

On the way into Second Street the other day, we stumbled onto the second day of Stroll & Savor, an event that invites restaurants and other stores to offer samples of their wares to sidewalk passersby. Musicians play in blocked-off street corners while people arriving in their cars struggle to find a place to park. I learned my lesson, early on, not to go to the grocery store – or anywhere else really – during events like Stroll & Savor if I had any hope of finding a parking spot near my house on Corona Ave. And yet, it was a small price to pay for community. 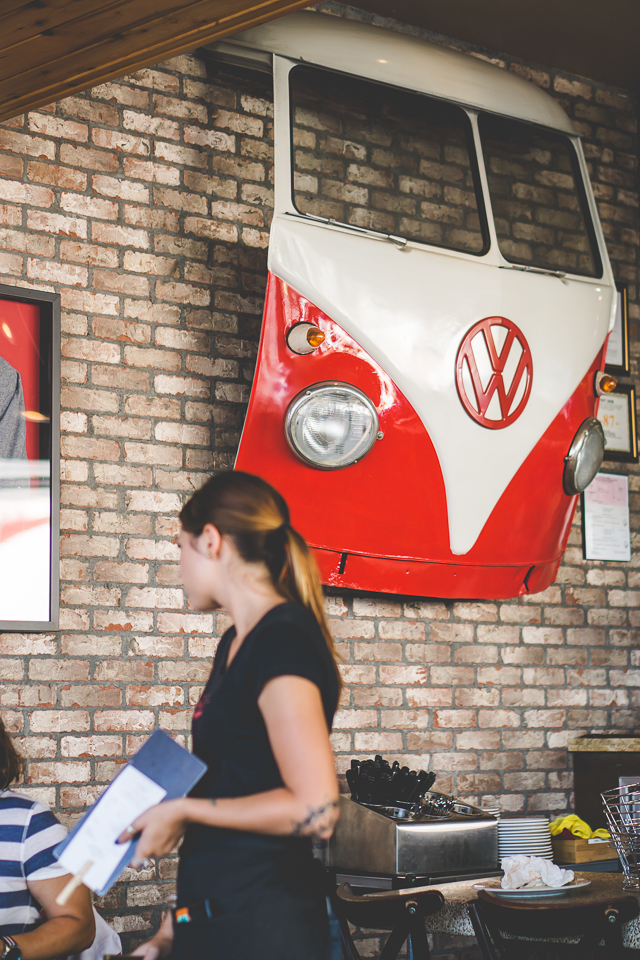 We stumbled past the growing crowds and street musicians and found ourselves an early table at Simmzy’s Pub. It was only several months after Simmzy’s opened in Belmont Shore that I realized the trendiness of things like Edison lamps, vintage Volkswagen paraphernalia, rough wood surfaces, and communal tables. Diners sipped their drinks next to the sidewalk, as the wide-open windows blurred the boundaries between the public street and dinner. Simmzy’s did the style so well that it must have influenced a number of other locations in their own space, including the Shore Public House (update: this restaurant is now closed) just across the street. 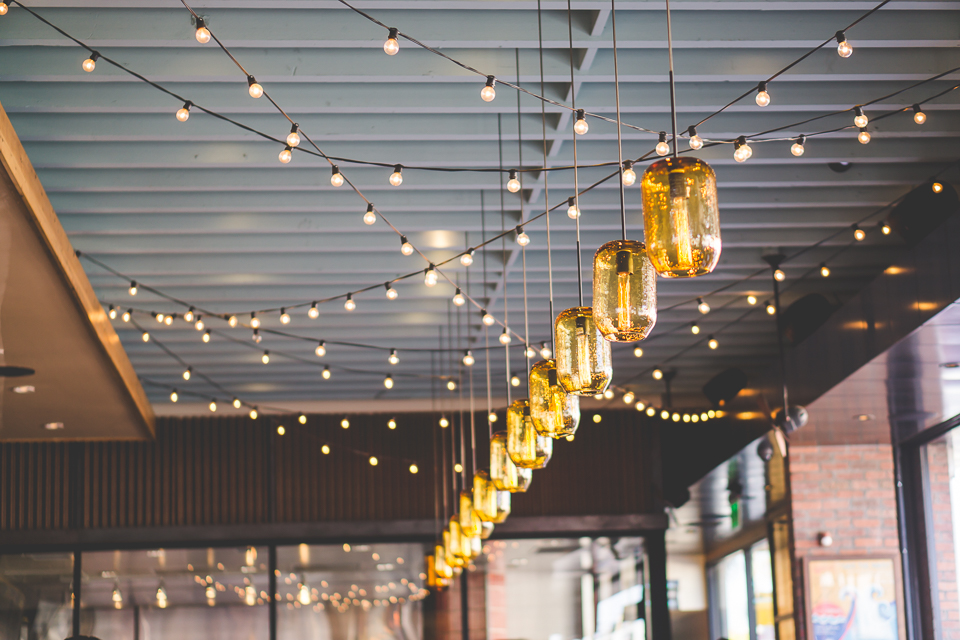 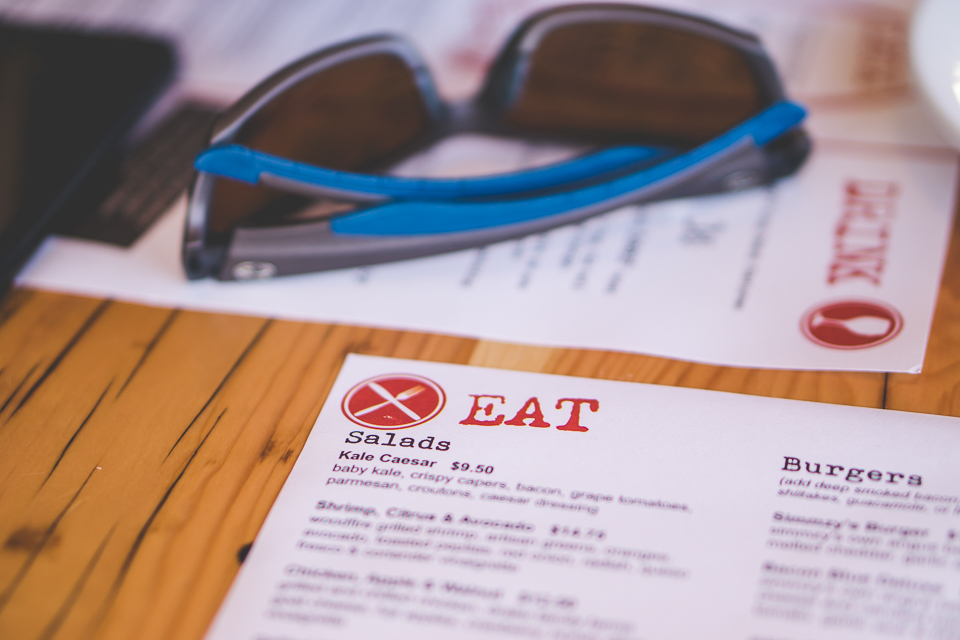 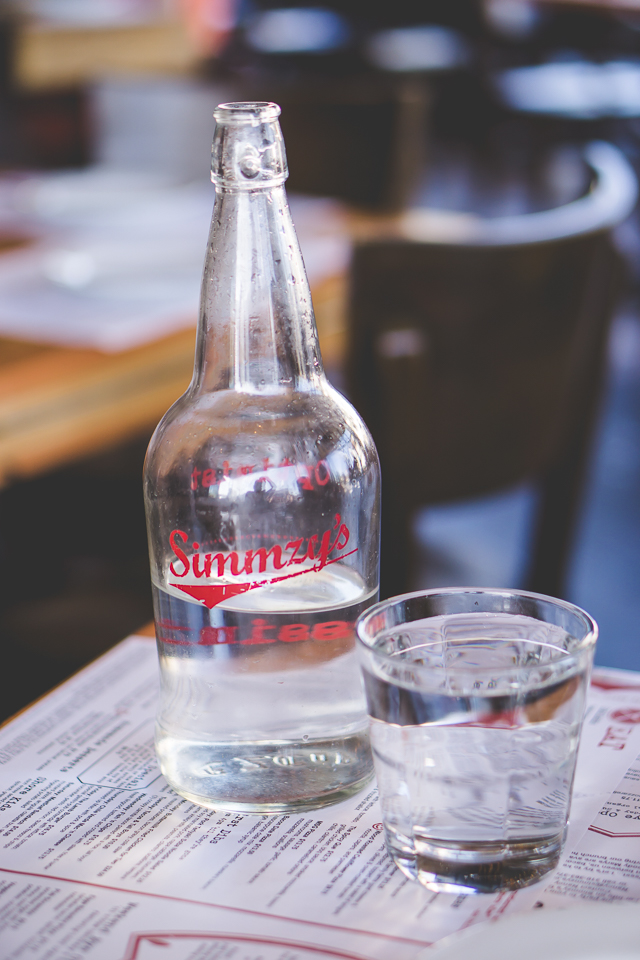 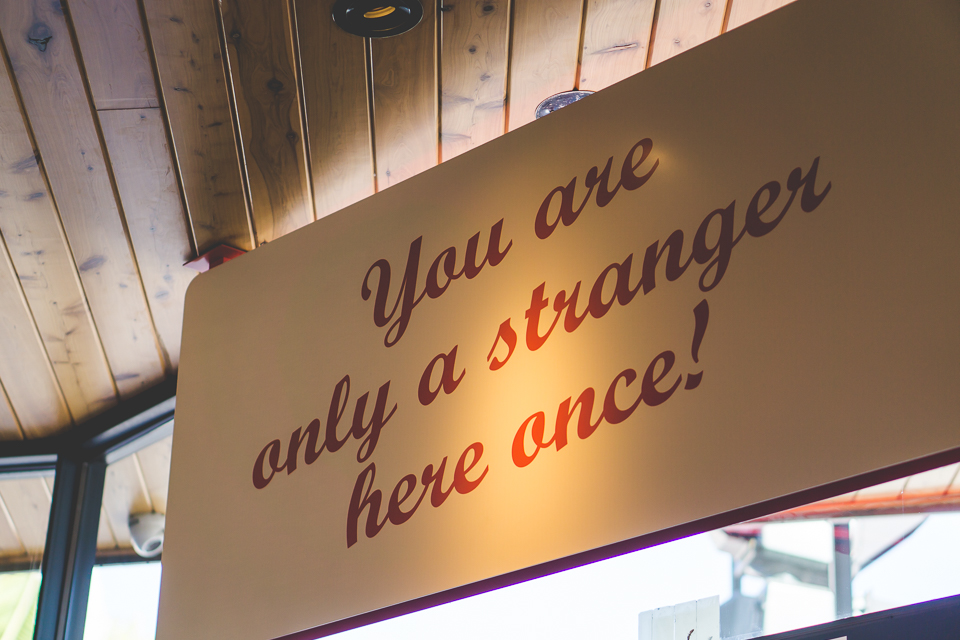 A substantial menu of beers on tap is accompanied by a much smaller list of wines – also on tap. Wine by the bottle is not available, our server told us, because they preferred to serve everything by tap which was fresher and did not use up as many bottles. Fair enough. When our appetizers came we didn’t bother to quibble that detail.

As often is the case, we often do not make it past the appetizers. Whether I am applying my best business school logic to the chronically huge portion sizes in American restaurants or I just don’t want to feel overstuffed, I am happy with our habit of having a dinner out consisting of wine and three or four appetizers. 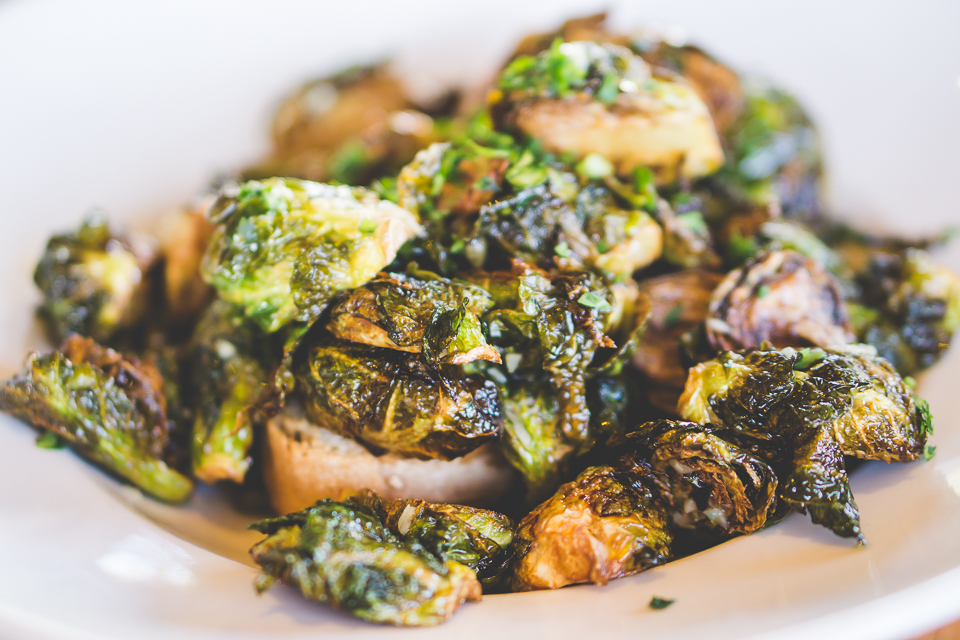 We are always happy with roasted Brussels sprouts, however for me the clear winner was the broccoli bathed in a creamy cilantro pesto sauce. And once we worked through enough of the Brussels sprouts, I saw the toasted round of bread that had absorbed all the juices. I greedily tore off chunks and dipped it in the remaining cilantro pesto sauce and gulped it down. Several times. It wasn’t a proud moment but I would do it again in a minute. 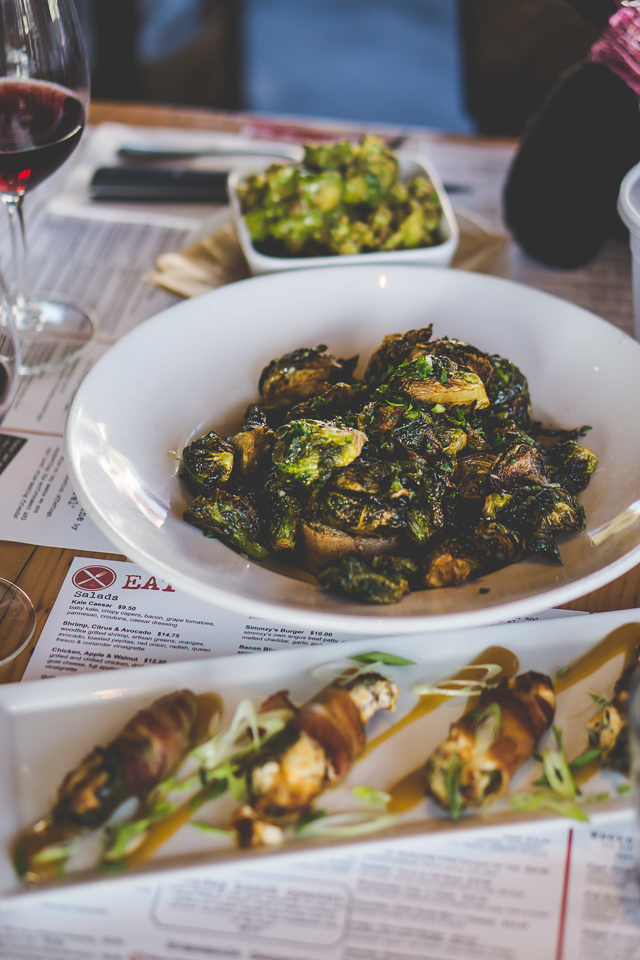 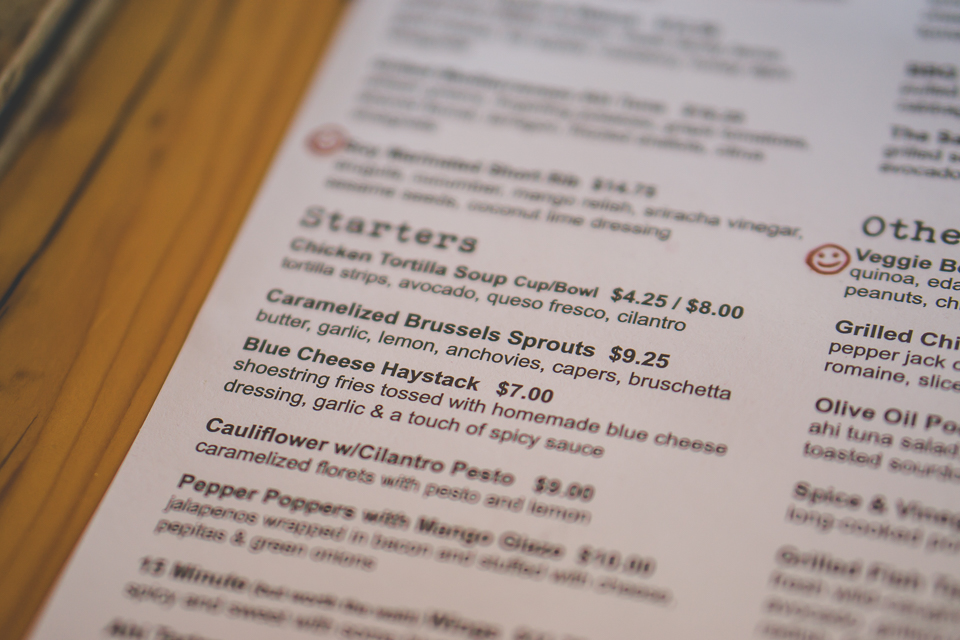 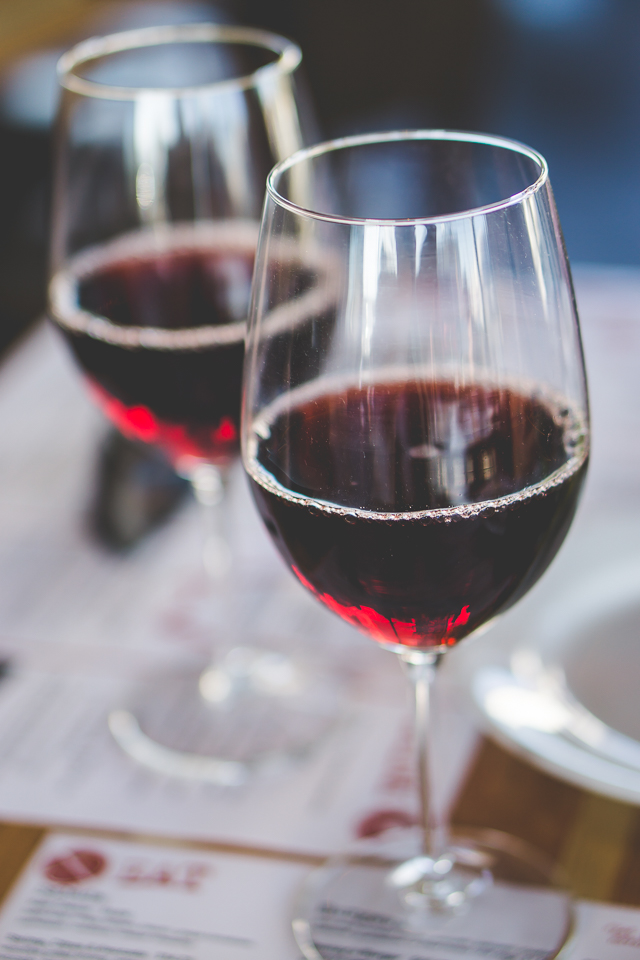 The Pepper Poppers with Mango Glaze finished off our round of appetizers. This was a plate of jalapeño peppers stuffed with cheese, pepitas, green onions and wrapped in bacon before being served on top of a mango puree sauce with big hints of honey. And for those in need of kid-friendly options, the chicken strips and fries were a miracle worker all on their own.

Our table at Simmzy’s was strategically located so that it could look straight down the communal table. One of the funnest innovations in current restaurants, communal tables are hardly a new invention. However, they are finding a place in eateries where people are invited to mix it up with their neighbors and talk to strangers over dinner. Charla could not resist the urge to fire her camera down the middle of the communal table and capture life at its best: over a meal, with a nice drink and nicer company on a warm summer afternoon. 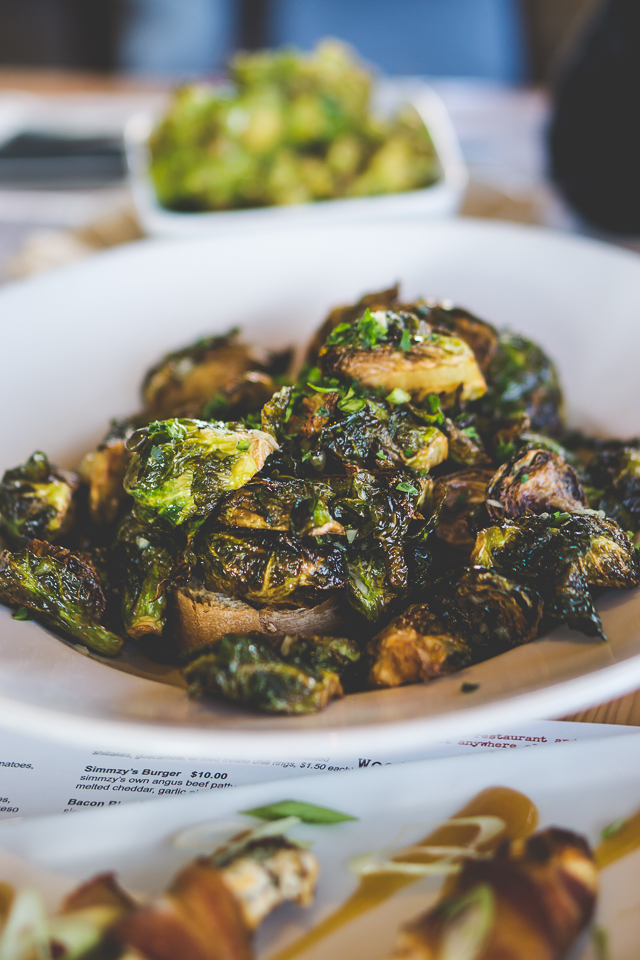 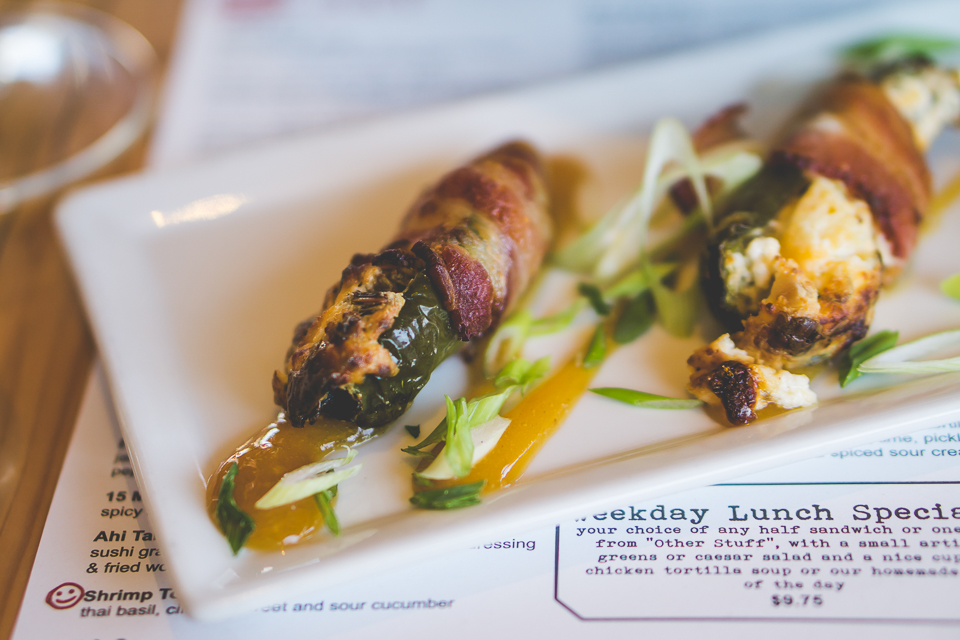 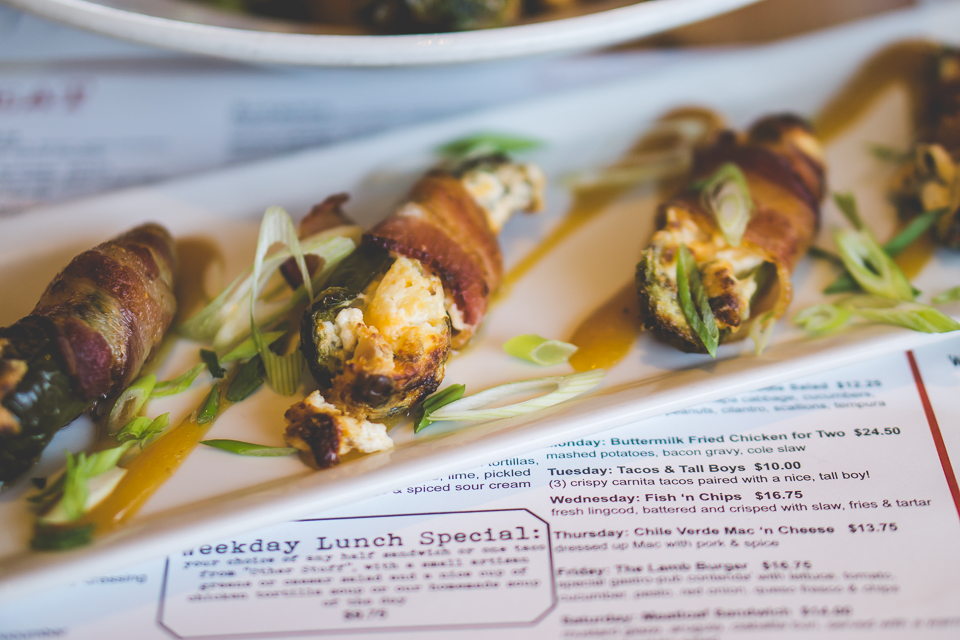 Pepper poppers with mango glaze. And did we mention bacon-wrapped? Why, yes. Yes we did. 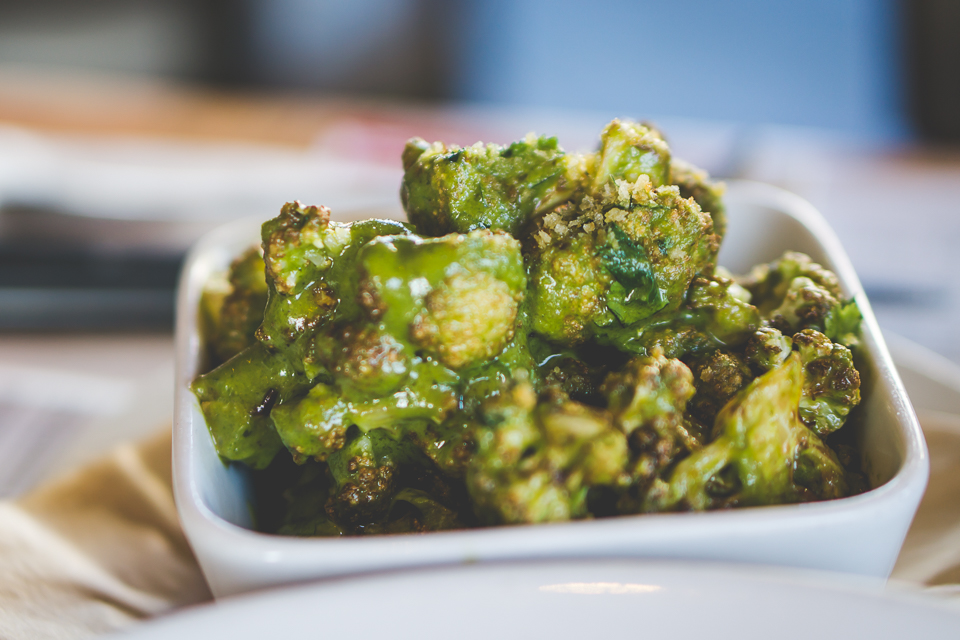 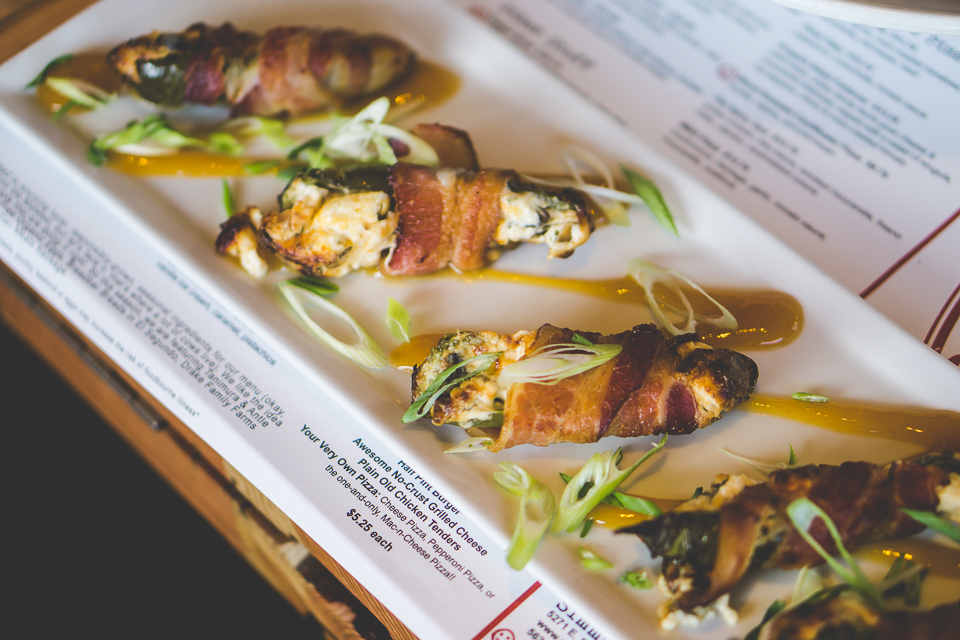 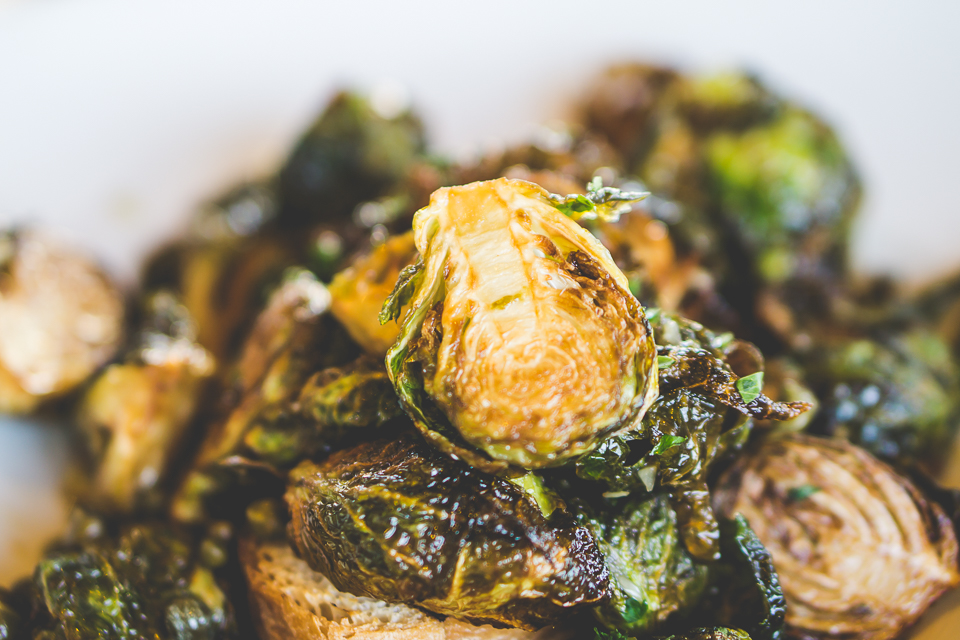 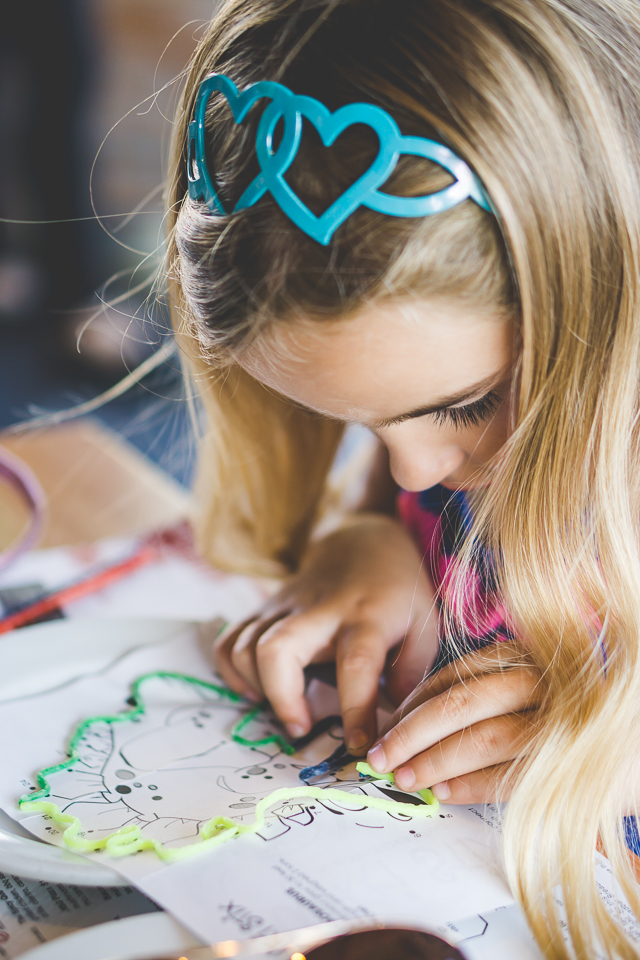 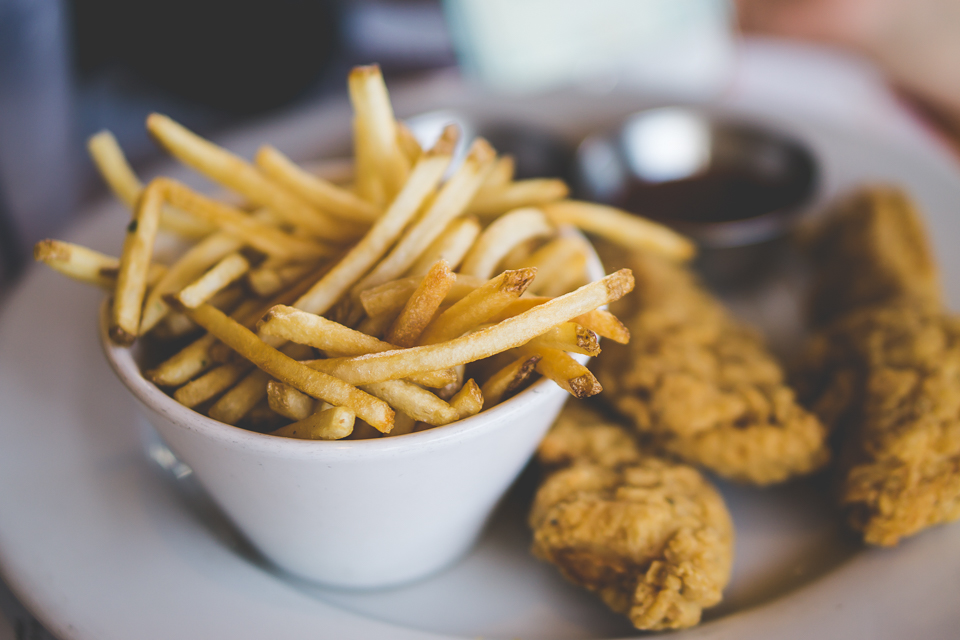 Chicken strips with fries and two kinds of sauce.

Was it on that day or on another day that I stumbled, belly full, into Apostrophe Books? I have spent years ambling through bookstores stacked with titles after a meal. I left Apostrophe with a fresh, autographed copy of A Cold and Broken Hallelujah, a murder mystery based in Long Beach by local author Tyler Dilts. By the time I got to page five, I was hooked.